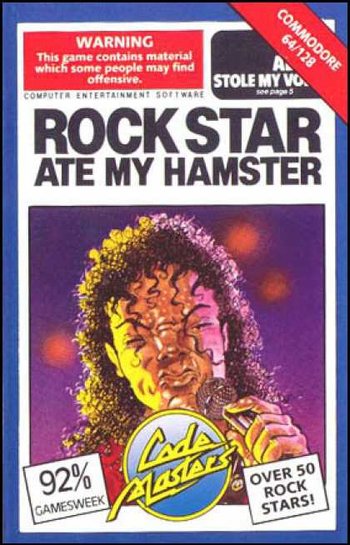 Rock Star Ate My Hamster is a video game created by Colin Jones and released by Codemasters in 1989 for the ZX Spectrum, Amstrad CPC, Commodore 64, Atari ST and Amiga. The game starts with Cecil Pitt and his put-upon employee Clive who realise their theatrical agency is all washed up and decide to give the music industry a try. Hiring between one and four rock stars and staring out with a small inheritance, they have one year to make it big. It doesn't take itself too seriously.

The game is named after a (fictional) incident where singer & comedian Freddie Starr was reported to have eaten a hamster in a sandwich.

The costs of hiring the stars are based on their at the time profile and popularity which can look odd to modern players - the most expensive star is "Bill Collins" (Phil Collins) who was at the peak of his career in the late 1980s. The cheapest is "Sidney Sparkle" (Gary Glitter) which given his current popularity (i.e. zero) is curiously prescient.

The only way to win is by getting four gold records - even if you become a multi-millionaire you'll still lose if you don't achieve this within the time limit.