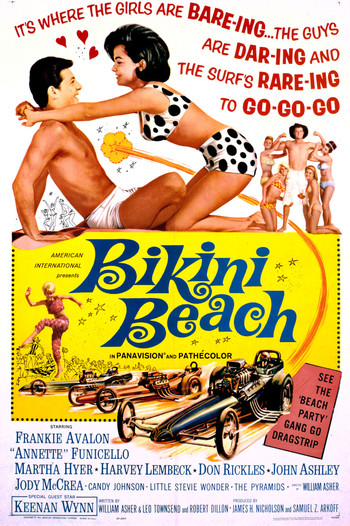 Bikini Beach is a 1964 American teen film directed by William Asher and starring Frankie Avalon and Annette Funicello. It is the third in the series of beach party films produced by American International Pictures (AIP).

Millionaire Harvey Huntington Honeywagon III (Keenan Wynn) is convinced that the teenagers who go to the beach are so senselessly obsessed with partying that their mentality is below that of a primate – particularly comparing them with his pet chimp Clyde, who can surf, drive, and dance better than anyone on the beach. Once he has demoralized the teenagers, Honeywagon also plans to turn Bikini Beach into a senior citizens retirement home.

Meanwhile, British mod rocker and drag racer Peter Royce Bentley (Avalon), better known as "The Potato Bug", arrives at Bikini Beach, where it does not take long for Frankie (also Avalon) to butt heads with him.