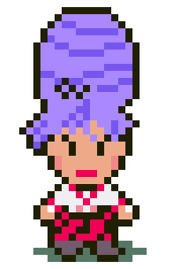 Magical Beehive Hairdos and an Earthbound-style adventure!
"Well, all of this does frighten me. To say nothing of how embarrassed I was at school yesterday, I’m not entirely confident in my own abilities, to fight or to handle my new powers responsibly. For one thing, we’ve only gotten our first experiences in combat last night, and I’ve always been somewhat of a klutz. However, I am quite interested in seeing the world outside Japan, and I am glad that I’m not the only one among us to have my hair the way it is. In fact, I’d rather be with all of you and put my own life and yours at risk than to continue going to school alone with this silly hairstyle. I’ll do my best not to let any of you or the world down."
—Miyuki Takara
Advertisement:

, by Economy (formerly McKnight, DMXrated, and then SeaRover), was first published onto Fanfiction.net in 2012, inspired more than a year earlier from the author's nostalgia for Earthbound and wish to create something similar set in Lucky Star.

One morning, Kagami wakes up with her hair mysteriously arranged into a massive bun, which is first discovered by her mother. Much to her embarrassment, it can't be undone, but then she and Tsukasa discover the same thing having happened to Konata, and it also happens to Miyuki afterwards. From there on, the girls are marked for death, discover that they are now psychics, and even befriend an indirect relative of Tsukasa and Kagami's, before setting off for an worldwide adventure that not all of them want to go on (especially with their hair the way it is).

. An upgraded version has also been started on The Fanfiction Forum

, though it has yet to continue past the first chapter. There is also a one-shot spinoff titled Starbound: Birthday of Destiny

, which shows the events leading up to the main story, as well as those of chapter 1 through the perspective of the twins' aforementioned cousin.

Not to be confused with the same-titled video game.