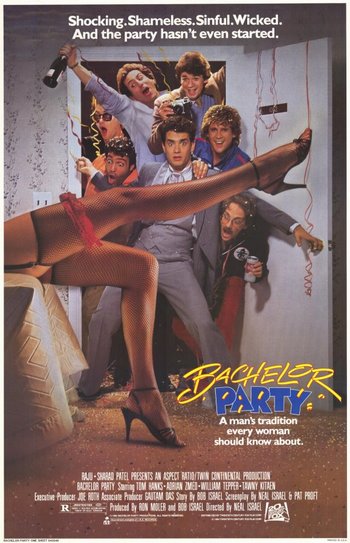 Party-animal Rick Gassko (Hanks) decides to settle down and marry his girlfriend Debbie Thompson (Tawny Kitaen), so his friends Jay O'Neill (Adrian Zmed), Dr. Stan Gassko (William Tepper), Rudy (Barry Diamond), Gary (Gary Grossman), Brad Mollen (Gradford Bancroft) and Ryko (Michael Dudikoff) decide to host him a Bachelor Party at a high-class hotel. All the usual hijinks with strippers and drugs and the men's wives/girlfriends being concerned and attempting to spy on them ensue, plus; Debbie's father (George Grizzard) does not think Rick is good enough for her, so he sends her ex-boyfriend Cole Whittier (Robert Prescott) to the party trying to murder him.

It was followed by Bachelor Party 2: The Last Temptation in 2008.