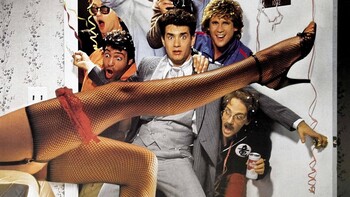 I'm getting married in the morning
Ding dong, the bells are gonna chime
Pull out the stopper, let's have a whopper
But get me to the church on time
— Alfred Doolittle, My Fair Lady
Advertisement:

A guy has a wedding, and they usually throw a wild party as their last day as a bachelor before the wedding day. Often, it gets wild, often having a lot of beer and smoking. Sometimes, they'll also go to a strip club or hire a stripper for the party. Occasionally, the bride-to-be (or the wife of one of the invited, in some cases) will walk in on the party and be horrified at this aspect. Known as a Bachelor Party in the United States.

Recently, it's been increasingly popular in comedy to show the guys trying to have a wild stag party, only to have it fall apart in a disappointing fashion. The stripper is over the hill, or a guy. The stripper dressed up as a police officer is an actual policewoman. The car breaks down. The stripper calls the best man to explain that she can't make it due to an illness/family emergency/flat tire/whatever else, and he doesn't have anything else planned. The entire party comes down with food poisoning from eating some bad shrimp cocktails. Etc. Often, while the guys expect that the women are having something akin to a bridal shower or a Tupperware party, or that his fiancée is at home watching TV in her sweatpants by herself, they're having a bachelorette party as wild as what the men were hoping for.

Somewhat of a Truth in Television, although it rarely ever gets as serious as above. Also note that its Distaff Counterpart, alternatively called a Hen Party or Bachelorette Party, has also become common. Compare Wild Teen Party. See Jumping Out of a Cake for the stripper in the cake which is often included.