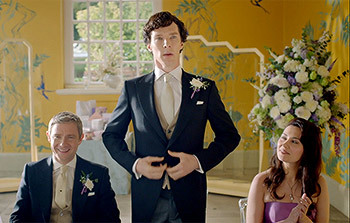 "The point I'm trying to make is that I am the most unpleasant, rude, ignorant and all-round obnoxious arsehole that anyone could possibly have the misfortune to meet. I am dismissive of the virtuous, [He looks at the priest], unaware of the beautiful [He looks at the maid of honour] and uncomprehending in the face of the happy [He looks at Watson and Mary]. So if I didn't understand I was being asked to be best man, it is because I never expected to be anybody's best friend. And certainly not the best friend of the bravest and kindest and wisest human being I have ever had the good fortune of knowing."
— Sherlock Holmes
Advertisement:

A Wedding Episode in which Sherlock faces his biggest challenge of all — delivering a best man's speech on John's wedding day.

While absolutely terrified out of his mind, Sherlock has started to prepare for John and Mary's wedding day, honing his napkin-folding skills, composing a unique violin solo and screening all of the wedding guests.

Once at the wedding, as part of the speech, Sherlock recalls two adventures on which he and John had gone, one named "The Bloody Guardsman" about a guardsman who had been stalked and found stabbed in a shower, without an attacker or a weapon in sight.

The other is about Sherlock and John going on a pub crawl as John's Stag Party, and while still embarrassingly drunk taking on a new client and trying to find out if the man a woman has been dating had existed at all, seeing as he had disappeared. When coming to from his hangover, Sherlock concludes by comparing similar women in similar situations that they were dealing with a man who takes over the identities of recently deceased in order to get to know women.

Though, once he's done retelling the last tale, Holmes realises the two cases were connected, because their client Tessa knew John's Embarrassing Middle Name, something that only those closest to him knew before he was grudgingly persuaded to put it on the wedding invitations.

Rapidly concluding that the Mayfly Man is after one of the guests, Sherlock Holmes has to figure out not only who he's after, but how the Bloody Guardsman got attacked in order to save John's wedding.