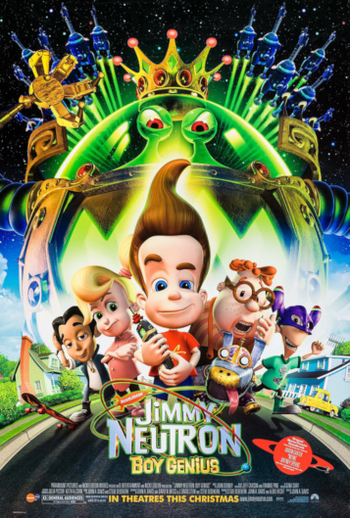 "Brain Blast!"
Cindy: What if it doesn't work?
Jimmy: It will work! ...I'm ninety-five percent sure it will.
Cindy: Ninety-five?
Jimmy: Yeah?
Cindy: Yeah, and the other five percent?
Jimmy: ...We blow up.
Advertisement:

The predecessor to Nickelodeon CGI series The Adventures of Jimmy Neutron, Boy Genius, this 2001 movie was originally going to be simply a pilot episode for the series. Instead, the Nickelodeon executives were so impressed they gave it funding for cinematic release. The film was a financial success; it did well in its domestic box office of United States and Canada but not in international markets.

Ten-year-old boy genius Jimmy Neutron has an IQ of 210. He's capable of inventing just about whatever he wants in his spare time, even rockets that can be used for launching satellites to communicate with alien races. (Of course.) Jimmy also has a robotic dog called Goddard that can do pretty much anything, a disproportionately large head and a strange hairdo - a fact constantly brought to the surface by his rival, Cindy Vortex. He's just living a relatively ordinary life (and by ordinary, we mean waking up and getting a robotic barber to do his hair, traveling to school via gum that turns into a transportation bubble, showing off his shrink ray in Show And Tell, etc.) until the first communication satellite he launched is intercepted by a race of amorphous aliens named the Yolkians, who arrive at Earth and abduct every adult in his hometown. When the gravity of the situation settles in, Jimmy and all the kids in town have to do whatever it takes to get their parents back, even if it means traveling into the farthest reaches of space.

Nick: Yeah, I can deal with that. I never got a ninety-five in my life.
Feedback

After escaping their cells and heading to the arena to rescue their parents and knocking out the two guards standing in their way, Nick Dean charges in, takes one look into the eyes of Poultra, and promptly runs away in retreat.

After escaping their cells and heading to the arena to rescue their parents and knocking out the two guards standing in their way, Nick Dean charges in, takes one look into the eyes of Poultra, and promptly runs away in retreat.