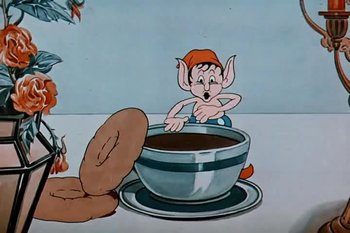 It is an adaptation of the old folk tale The Elves and the Cobbler. As in the story, the cartoon finds a cobbler and his wife in desperate straits, with no money and no food, and the cobbler making one last pair of shoes. The cobbler hears a noise and is startled to see an elf, out in the bitter cold and snow, asking for shelter and food. The cobbler shares with the elf the very last bit of food he has: a single doughnut.

In this version of the story elves really like doughnuts. After singing a song about how much he loves to dunk doughnuts, the elf leaves and summons his elf buddies. A whole gang of elves then show up at the cobbler's home and start making shoes.