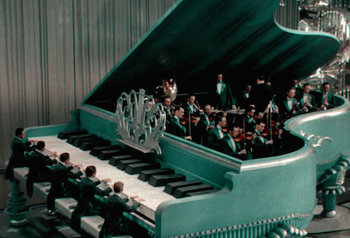 King of Jazz is a 1930 film directed by John Murray Anderson, starring Paul Whiteman and his orchestra.

Whiteman, who called himself "king of jazz" despite being as white as his name, was a famous American bandleader—the first famous bandleader, in fact (and thus, being also one of the first "stars" of American popular music). King of Jazz was initially conceived as a Paul Whiteman Biopic, but that idea was abandoned. Instead, the film is simply a revue, a collection of musical numbers performed by Whiteman and his band, with short comic sketch sequences between the songs. The film took advantage of a lavish budget, with huge sets, lots of dancers, and innovative graphic effects. It was also shot in two-strip Technicolor, making it one of the earliest sound features made entirely in color, a trend that began in 1929. The film however is one of a few of them that have survived completely. Most early color talkies are now lost/incomplete or surviving as made-for-TV black-and-white duplicates.

The film includes an opening cartoon by Bill Nolan and Walter Lantz, which was the first-ever cartoon made in the Technicolor process. Bing Crosby made his film debut as one of "The Rhythm Boys", a vocal trio also consisting of composer/pianist Harry Barris and Al Rinker. Popular vocalists John Boles and Nell O'Day were featured singing as well, while actress Laura La Plante appears in some of the sketches. The Roxyettes/Rockettes appear in some dance sequences.

Compare The Hollywood Revue of 1929, a similar plotless revue movie.