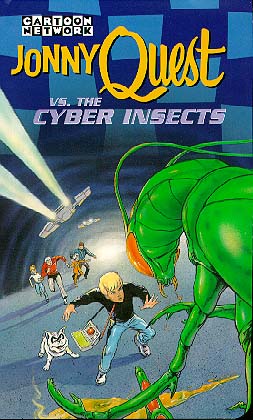 Jonny Quest vs. the Cyber Insects is the second TV movie made for the Jonny Quest series, following hot on the heels of the earlier Jonny's Golden Quest. It aired on on TNT in 1995, one year prior to the release of Jonny Quest: The Real Adventures, making it the final program using the classic 1960s character designs of the original series until 2015's Tom and Jerry: Spy Quest, which saw the Quests team up with Tom and Jerry.

The basic plot has Jonny's father Dr. Benton Quest called in by a nebulous group called Intelligence 1 to investigate strange weather phenomenon that is affecting the entire planet. It turns out that the Quests' old enemy Dr. Zin is behind it all, using a stealth satellite to control the Earth's weather. On top of this, Zin has a veritable army of genetically-engineered insect monsters, with which he plans to invade Earth after his weather machine is done softening it up.

Benton and his colleague Dr. Eve Belage end up as captives aboard Zin's asteroid fortress after Zin tractor-beams the entire space station into it, and Jonny, Hadji, Race and Jessie (Race's daughter, introduced in the previous film) must rescue them.