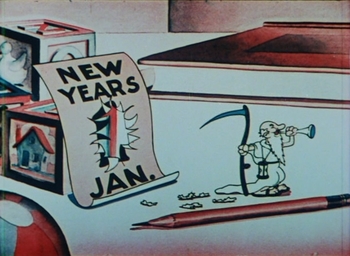 "Should old acquaintance be forgot..."
Advertisement:

Holiday Land is a 1934 animated short film (8 minutes) by Charles Mintz. It was produced by Columbia Cartoons under their "Screen Gems" label.

Scrappy is a mischievous little boy who likes sleeping late in the mornings. When his alarm clock rings in the morning he smashes it with a mallet. His mother, frustrated at Scrappy's inability to make it downstairs for breakfast, yells from offstage that he's a "sleepyhead!" This causes a frustrated Scrappy to wish that every day was a holiday so that everyone could sleep late and no one would call him a sleepyhead.

His wish comes true. The wall calendar explodes and falls to the floor. A tiny version of Father Time jumps out of the calendar page for Jan. 1, New Year's Day. Santa jumps out of the calendar page for Dec. 25, Christmas. A witch on a broomstick and three pumpkins jump out of the page for Oct. 31, Halloween. Tiny Father Time climbs up to Scrappy's bed, wakes him up, and takes him to Holiday Land, a magical place where there are holidays everywhere, and you can go to whichever you want.