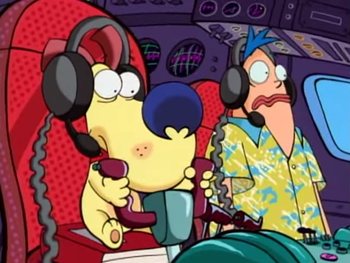 Shouldn't this be the other way around?
Ms. Grunion: In my opinion, a dog can never be a suitable parent to a little boy.
Mr. Peabody: I must point out, Ms. Grunion, that I won the right to adopt Sherman in a court of law!
— Mr. Peabody & Sherman
Advertisement:

When you make a work about a boy and his dog, should you:

A. Go with the original route by making the boy smarter than the dog or,

B. Add an unconventional twist by making the dog smarter than the boy?

If you chose B, then you have this trope.

This trope is flexible and therefore this does not mean the less intelligent one has to be an actual human. There are duos where both the hero and the sidekick are animals (e.g. SpongeBob and Gary), and some duos where the "human" isn't the animal's owner. (e.g. Bernie is Corneil's "dog-sitter".)

The human does not always necessarily have to be "dumb", but the animal must be smarter in comparison to the human. The animal will often be a Hyper-Competent Sidekick to the human.

Important note: "Smart Animal" does not mean "Talking Animal", because an animal can still be smart without talking, and talking animals can also be silly and incompetent.