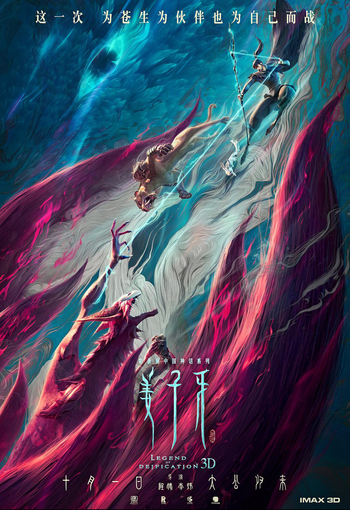 The Legend of Deification
Jiang Ziya (Chinese: 姜子牙; Pinyin: Jiāng Zǐyá), also known as The Legend of Deification, is a 2020 Chinese feature-length animated fantasy film by Beijing Enlight Pictures, Coloroom Pictures, Zhongchuan Hedao, and Cocoa beans Animation. Serving as a followup to Ne Zha, the plot is a sequel to the events of the second act of classic novel Investiture of the Gods, attributed to Xu Zhonglin. Initially scheduled for release on 25 January 2020, the film was postponed until 1 October 2020. On 9 February 2021, an English dub featuring Christopher Sabat as Jiang Ziya was released.
Advertisement:

After the powerful Fox Devil known as Nine-Tailed drove Emperor Zhou of the Shang Dynasty to madness and plunged the mortal world into ruination and chaos by instigating a Great War, the gods of the Celestial Bureaucracy sent a divine army led by the Immortal warrior Jiang Ziya to slay her. Defeating the Nine-Tailed and ending the Great War, Jiang was tasked by the Heavenly Master of Jingxu Hall with executing her, but hesitated when the Nine-Tailed revealed the life of a young woman was tied to hers. For his failure to comply, Jiang was stripped of his divinity and exiled to the frozen wasteland of Beihai by the gods — who dismissed Nine-Tailed's revelation as an illusion — until he could admit he had been tricked; accompanied by the divine beast Four-Alike and the shapeshifting Immortal Shen Gongbao.

Ten years later, Jiang encounters Xiao Jiu, an amnesiac young woman with fox-ears who he recognizes as the girl from Nine-Tailed's vision. Determined to uncover the truth behind Jiu's identity and her connection to Nine-Tailed, Jiang decides to accompany her on her quest to reach Mount Youdu and regain her memories.