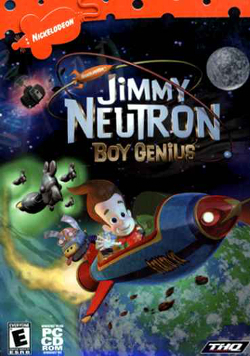 Jimmy Neutron: Boy Genius is the video game adaptation of the film of the same name, albeit with a somewhat different plot. It was initially released in 2001 for PC, with PS2 and GBA versions following in 2002.

The science fair is coming up and boy genius Jimmy Neutron's entry is a teleportation system using the city's phone booths. He asks his friend Carl to test teleporting from one phone booth to an adjacent one. He declines, saying the contraption looks "dangerous". Jimmy then resorts to his Robot Dog Goddard, who is also reluctant at first. Jimmy lures him in with some foil. Goddard's (robotic) animal instincts kick in and he strolls in the phone booth... and comes out the other one unscathed. With this, Jimmy is confident he'll eventually be capable of teleporting anywhere, "even to outer space". Surely this will win him first place at the science fair!

This game's sequel of sorts is Jimmy Neutron vs. Jimmy Negatron.