Video Game / The Adventures of Jimmy Neutron: Boy Genius: Attack of the Twonkies 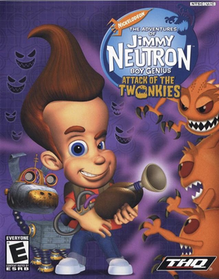