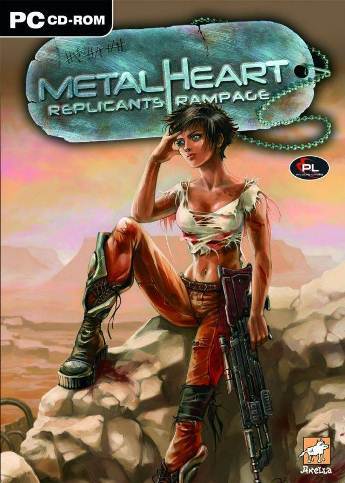 Trashy cover for an equally trashy game.
Metalheart: Replicants Rampage is a 2005 Turn-Based Tactics / Role-Playing Game, released by the developer NumLock Software. It begins in the undetermined future, with Lantan Signi and his companion Sheris Sheridan flying a space ship that collided with another, forcing them to make landing at an an unknown planet. It turns out to be a desert world belonging to the Numori Empire, where prisoners and other undesirables are sent to mine the previous mineral tactonium. Our “heroes” don’t want to do anything with such, and only plan to repair their ship and escape as soon as possible. However, this turns out to be harder than they first thought.

The game was known for the extraordinary number of bugs when released, requiring large patches to work and even version 1.042 still possessing plenty of programming errors. This, combined with the general bad design and highly derivative nature of the game, had led to uniformly negative reviews