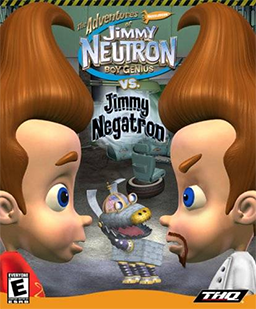 Jimmy: Can't anything ever be different?!
Narrator: Oh, but it can be. And somewhere, in another dimension, things are different. Very different. [...] In this other dimension is a boy named Jimmy Negatron: evil boy genius. And if this boy has his way, things will change in Retroville.
Advertisement:

Jimmy Neutron vs. Jimmy Negatron is a 2002 GBA game (ported to PC the following year), and a sequel of sorts of the video game adaptation of the animated film. The game follows a more linear storyline than its predecessor.

At the start of the game, the eponymous Jimmy Neutron is attending a class field trip to the Retroville Museum. He quickly finds himself bored silly by his teacher's lecturing. Thoroughly fed up with it, he exclaims, "Can't anything ever be different?!"

Meanwhile in an underwater base in another dimension, we're introduced to the eponymous villain of the game, the goatee-clad Jimmy Negatron, who is presently working on the final phase of his greatest plan: to dominate Jimmy Neutron's dimension.

Back at the museum, Cindy Vortex is fascinated by an exhibit on a theory concerning time travel, which Jimmy claims is full of gaps. Being a boy genius, he then shows that he has the theory perfected and, using a conveniently placed portal, attempts to go back 50 years. Negatron detects this and intercepts the signal, diverting it into a cage in his lab. Negatron explains that he intends to take Jimmy's place and change his dimension just for fun. He leaves his large robotic henchman, the Herminator, to guard his prisoner.

Jimmy, correctly guessing the Herminator isn't too bright, deceives him and escapes with relative ease. With only the items in Negatron's lab for him to MacGyver together into something useful, he has to get back to his dimension and revert Negatron's tampering.