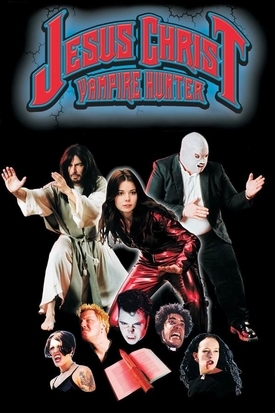 The Power of Christ impales you!
Advertisement:

A delightfully schlock-filled B-movie from Canada, Jesus Christ Vampire Hunter is pretty much exactly what it sounds like it would be about - Jesus Christ has returned, and he's fighting vampires.

For reasons unknown to anyone in the Catholic Church, there have been a rash of attacks on lesbians by vampires, and to make matters worse, they're now immune to sunlight (the vampires, not the lesbians, although it probably won't kill them either). There can be only one solution - to get Jesus from his hiding place, and take on the vampires, including the lesbians they've turned into more vampires. Along the way, he'll have to enlist the help of Mexican wrestler El Santos, "Apostle to the Apostles" Mary Magnum, and... learn to do a snazzy musical number?