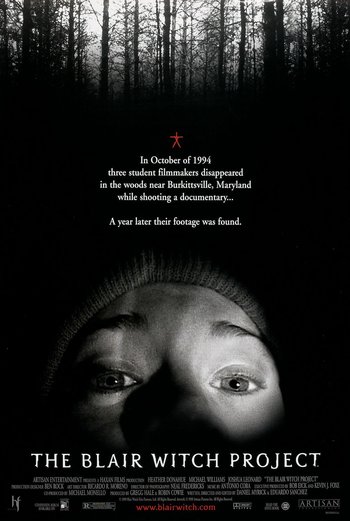 Scary as hell.
"I just want to apologize to Mike's mom, and Josh's mom, and my mom. I am sorry, everyone. I was very naive. I am so, so sorry. For everything that has happened. Because in spite of what Mike says now, it is my fault. Because it was my project... Everything had to be my way. And this is where we've ended up. And it's all because of me that we're here now. Hungry, cold, and hunted..."
— Heather, in an iconic and oft-parodied scene

The Blair Witch Project is a 1999 horror movie, shot entirely in the style of a documentary gone horribly wrong. It became one of the most successful independent films of all time, and is also commonly credited as the Trope Codifier/Genre Popularizer of the found footage subgenre of horror, a trend that became so frequent in the decades following that it was driven into the ground over time.

It revolves around three college students in 1994 — Heather, Mike, and Josh — who decide to make a documentary about the fabled "The Blair Witch", which is said to haunt the forest near the small town of Burkittsville, Maryland. After interviewing the locals about several creepy and macabre incidents in the area, the trio eventually decide to journey into the forest where the legend is supposed to have started. Things ultimately take a turn for the worse.

Apart from its revolutionary format, what it's also notable for is having one of the best Viral Marketing campaigns ever, and certainly one of the first to demonstrate the effectiveness of Internet advertising. Fake online documents, footage, published dossiers, interviews, and even a couple of professional-looking television documentaries blurred the line between truth and fiction like few other campaigns had done before or have since. Many were convinced that the movie was based on a true story, or even consisted of actual footage. Even more were convinced that the "Blair Witch" was a real legend, as opposed to something the filmmakers made up themselves.

The success of the film gave way to a multimedia franchise, which currently consists of: