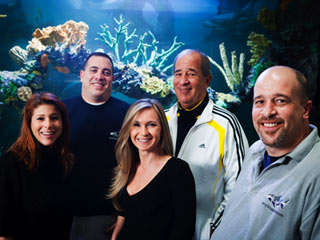 Tanked is a Reality Television series on Animal Planet. It follows the operations of Las Vegas-based Acrylic Tank Manufacturing, owned by brothers-in-law Brett Raymer and Wayde King. ATM bills itself as the world's largest manufacturer of customized aquarium installations. In addition, Wayde's wife/Brett's sister Heather is the company's accountant and Heather and Brett's father Irwin Raymer (also known as "The General") is the office manager.

The show ran for fifteen seasons in syndication and continues to air in reruns.

Tropes present in this show: