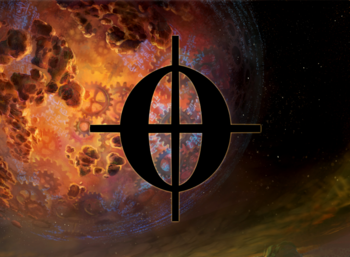 "The New Man becomes God becomes Amaranth..."
"The red sands of the moon. The wreckage of Nirn is eclipsed by the towering Numidium, a robot made of brass spikes, from head to toe, doing battle with the tiny various gods and heroes that oppose it. Some fly on strange beasts, some fly of their own accord, some use beam-weapons from a bygone age, others blast magic from their hands, eyes, or chests. The Numidium is winning this battle, though. Easily."
Advertisement:

is a web graphic novel script written by former The Elder Scrolls series developer Michael Kirkbride. It was released to the public on February 14, 2014.

C0DA is set on Nirn in the far distant future of the late Fifth Era. Numidium, the Reality Warping Humongous Mecha of Dwemer construction, presumed destroyed following the events of Daggerfall, returns after having been caught in a time warp. It continues its war on the Aldmeri Dominion, led by the fascistic Thalmor, leading to an apocalyptic event known as "Landfall", which has forced the remaining inhabitants of Nirn to take refuge on the moon Masser. The story centers around the Dunmer noble, Jubal-lun-Sul, who seeks the means to shepherd his people to a safe world, away from Landfall.

The story is told in Kirkbride's signature writing style, with plenty of New Weird and Mind-Screwy elements. Cosmic Retcons, Time Crashes, Physical Gods, and even some Leaning on the Fourth Wall are prevalent.

C0DA is the final text in a loosely connected series of "Obscure Texts", including Loveletter From the Fifth Era

, The Prophet of Landfall

, the "partially released" Landfall: Day One

, and two intentionally Missing Episodes: Dies Irae and Stringendo.note Ironically, the link to the original post of Landfall: Day One is now broken, making it "lost" as well. (The situation is reminiscent of the missing portions of The Trojan Cycle, in which it is generally known what happens, but the details are lost.)

According to Kirkbride, the main purpose for C0DA is to encourage the idea of The Elder Scrolls lore as a living open-source world that anyone can freely contribute to and reinterpret in their own personal manners. The text itself can not really be interpreted as "canon," more so it attempts to persuade the reader to deconstruct the idea of canon entirely. That said, the text does flesh out some of the ideas and concepts discussed in Kirkbride's other "Obscure Text" works, like the idea of Amaranth and a possible explanation of what happened to the Dwemer.

To that end, C0DA and its supplementary works have inspired many fantastic fan works, such as Hircine1's Landfall: Day -1

C0DA and its supplementary texts provides examples of:

"NEW LANGUAGE, CONTINUED MEANING, STRING-STRAND OF BOTH. MEANING REMAINS: WELCOME TO THE HOUSE OF WE."