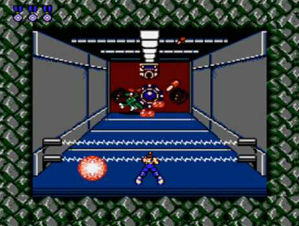 You'll never guess where you have to shoot.
Advertisement:

Bosses in Video Games come in all shapes and sizes: giant monsters, giant robots, giant spaceships, and so on ... and then there are bosses who have no recognizable form whatsoever, taking an abstract (and usually mechanical) form distilled into two classes of elements: "Cores", the weak points you must attack and destroy to defeat it; and "Turrets", the weapons that attack you during the process.

These categories can overlap; it's common to see components that are both a weapon to deal with and a weak point to destroy.

This manner of boss is often stationary, such as being part of a defensive barrier or a vital element of a structure — and in the latter case, there's a very good chance its also a Load-Bearing Boss.

Reactor Boss is a specific Sub-Trope, as the reactor is usually a core component itself and surrounded by various defensive turrets. The Battleship Raid also shares some similarities