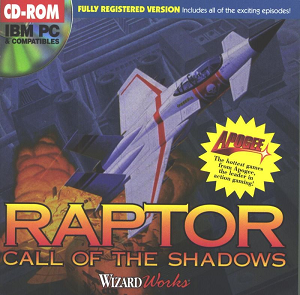 This ain't no dinosaur game!
Your engine's turbines roar as you scream out of the sky. Startled troops look up just in time to see your wing cannons blaze. You feel the plane buck slightly as your missiles streak towards their targets. A flash in the distance tells you that they have done their job and so have you. The Mega-Corps pay well, for those good enough to survive. They call you into the shadows with dreams of wealth, and you answer, the only way you know how.
Advertisement:

Raptor: Call of the Shadows (often called Raptor for short) is a 2D Vertical Scrolling Shooter for the x86 PC written for MS-DOS by Cygnus Studios (which has since changed its name to Mountain King Studios). It was published by Apogee Software on April 1, 1994. In 1999, Mountain King Studios re-released Raptor as a native Windows program, and in 2010, the game was re-released again by DotEmu as Raptor: Call of the Shadows 2010 Edition, featuring smoother graphics with support for higher resolutions, as well as native compatibility with Windows XP, Vista, and 7. In 2015, it received yet another re-release as the 2015 Edition, which adds Steam achievements and partial controller support.

There is not much of a story in the game. Your character is a mercenary flying the super-tech Raptor, sent on interplanetary missions to knock off top competitors of MegaCorps. Thus, the player does not receive points for destroying enemies and buildings; instead, the scoring system is ditched in favor of a monetary rewards system due to working for the aforementioned generically named MegaCorps.

The game is divided into three "sectors": Bravo Sector, Tango Sector, and Outer Regions, all of which have nine sub-missions called "waves", making for a total of 27 levels. The full version of Raptor allows players to start out in any of the three campaigns, though playing them in order will help the player to more easily accumulate money for weapon and shield upgrades.

Not related to bird of prey raptors, and probably not related to the real-world F-22 Raptor, as the name was actually inspired by velociraptors.

Raptor: Call of the Shadows provides examples of the following tropes: