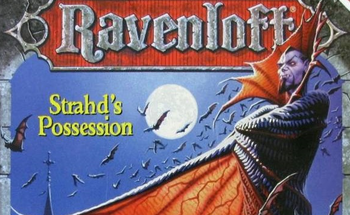 Ravenloft: Strahd's Possession was a video game released in 1994 for the PC, developed by DreamForge Intertainment for Strategic Simulations Inc. Set in the Ravenloft world of Dungeons & Dragons.
Advertisement:

Players created two characters who were retainers of Lord Dhelt of Elturel. An assassin attempts to kill Lord Dhelt, and the players give pursuit. They manage to kill the assassin, but as they are retrieving Dhelt's holy symbol, mists envelope the party and bring them to Barovia, a land surrounded in poison mist. The party must attempt to find their way back home before the cursed land overtakes them.

Strahd's possession had a sequel released in the following year, called Ravenloft: Stone Prophet, set in the desert world of Har'Akir, where the party gets trapped there after a strange aurora fills the skies of Elturel. The same protagonists from the first could be imported into the second adventure, but aside from a few Continuity Nod, the adventures are not linked.