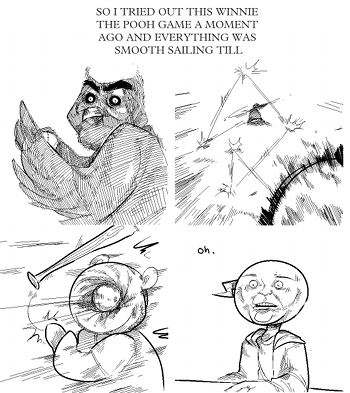 by Things That Suck Ass

"Silly gamers expecting games for kids to be easy... have you forgotten who the target demographic of the original Nintendo Hard games were?"
— Troper Servbot

Naturally there are a lot of things that happen that we just don't expect. This trope is when you just don't expect a game to be Nintendo Hard. You'd expect a shooter with robots spraying machine gun fire to be difficult, but a game with fairies shooting spells at you from their wands can still hand your ass to you.

Difficult games can be anywhere, in any genre. Of course this is YMMV, but the fact of the matter is that difficult games don't exactly have any kind of official way to mark themselves, so they can show up when we least expect them. As these examples show, woe betide those who judge a game by surface "cuteness".

When occurring in licensed games based on children's series, chances are that you expected the Animation Age Ghetto to be applied to them. Often goes hand-in-hand with Art-Style Dissonance, as people often expect a "cute" game to be non-challenging, both in mechanics and in plot. Unexpectedly Realistic Gameplay is also related, as part of the difficulty may stem from the fact that the game avoids certain conventional simplifications and shortcuts found in other games of the same genre that players have come to expect by default. Also another reason American Kirby Is Hardcore.

Alternative Title(s): Harder Than It Looks