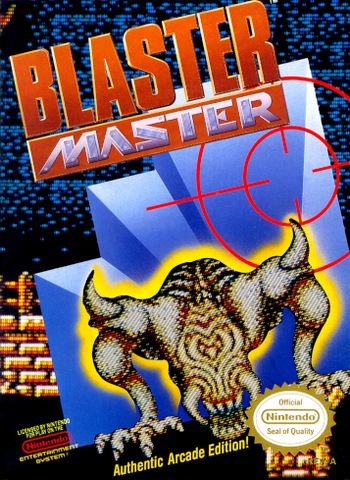 It's the year 2052. On the distant planet Sophia the 3rd, located in the Epsilon Milky Way, a flourishing advanced civilization is suddenly attacked by the evil emperor Goez and his "Invem Dark Star Cluster" army of mutants, who have conquered every other planet in outer space. The only survivors of the raid are a small sect of the local Science Academy known as "Nora Satellite", who escape and decide to build a weapon to defeat the Invem Dark Star Cluster and Goez. With the help of designer Dr. Jennifer Cornet, they create an all-purpose mobile tank known as Metal Attacker, and enlist a young man by the name of Kane Gardner to pilot Metal Attacker and destroy Goez.

At least, that's the Excuse Plot if you live in Japan and bothered to read the manual. If you lived anywhere else, the game was called Blaster Master and followed the (frankly ridiculous) story of Jason Frudnick, a high school senior on (then) modern-day Earth who finds a frog and names him Fred. One day, Fred escapes from his fish bowl and encounters a crate of radioactive material, causing the pet frog to grow several times larger and subsequently fall down a large hole. Jason, in pursuit of Fred, leaps down the hole himself and comes face to face with a giant armored vehicle called SOPHIA THE 3RD, which was designed to fight radioactive mutants living Beneath the Earth. Jason, ever the hero, puts on a combat suit and gets inside the vehicle on his way to find Fred and destroy the mutants' leader — the Plutonium Boss.

While the original Metafight achieved only middling success in its home country, Blaster Master became far more popular in the West, and has since been deemed a Cult Classic for the Nintendo Entertainment System. Sunsoft would later continue the series with multiple sequels (and one unofficial Brøderbund sequel) of varying quality.

Following the release of Overdrive in 2010, the series went dormant until 2016, when Inti Creates (of Mega Man Zero and Azure Striker Gunvolt fame) announced that they had acquired the license from Sunsoft. Inti Creates went on to develop and release a trilogy of remakes/reboots of the franchise under the title Blaster Master Zero, pulling elements from across the previous Blaster Master and Metafight sagas and combining them into one definitive package.

There was also a Worlds of Power novelization of the first game, written by Peter Lerangis (under the pen name A.L. Singer). Elements from the novel were used in Blasting Again and Zero, making it the only novel in the series to become canon.

Blaster Master does not, by the way, run Bartertown.