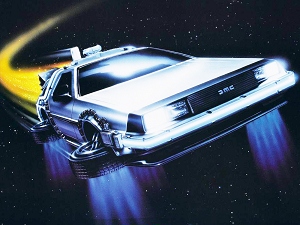 This is a sci-fi trope in which a wheeled vehicle of some kind is capable of flying or hovering by simply rotating the wheels 90 degrees, usually up and into the vehicle in question. The hubcaps then become thrust-capable engines, propelling the vehicle upwards.