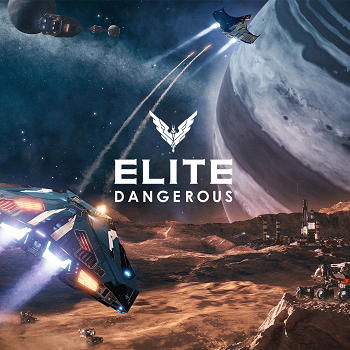 Elite Dangerous is the Distant Sequel to Frontier: First Encounters and the fourth game in the Elite series of space Simulation Games, developed and published by Frontier Developments.

Elite Dangerous takes place in the Milky Way galaxy 1286 years from now, starting approximately 45 years after First Encounters. True to its tagline, Elite Dangerous features the 400 billion stars thought to exist within the Milky Way, 150,000 of which are based on actual astronomical data, and the other 399,999,850,000 being created through Procedural Generation. It also features the return of the Galactic Federation, the Empire of Achenar, and the Alliance of Independent Systems from the previous games, as well as hundreds of smaller factions within each of the three superpowers, and the faction that the player belongs to, the Pilots Federation. There is also an underlying story to the game accessible via an in-game news service featuring political clout within the Space Cold War between the Empire, the Federation, and the Alliance, as well as some mysterious events pointing to the legends of the Thargoid race being more than just legends...

Gameplay in Elite Dangerous is similar to other games in the Elite series—players start out with 1,000 credits, a small starting ship with basic equipment, and the goal of reaching the coveted "Elite" rank through collecting bounties, trading goods, and exploring the galaxy. There is no set path or timeframe for players to do this, and they are free to do whatever they want in pursuit of this goal.

In a first for the series, Elite Dangerous features the ability to influence faction standings within a star system which, if enough influence is reached, can result in a major shift in that system's loyalties, whether it be a Federation system seceding to the Empire (or vice versa) or an independent system aligning with the Alliance. In addition, it is also the first Elite game with any sort of multiplayer functionality, in the form of it being a partial Massively Multiplayer Online Roleplaying Game, with options for "Open Play", where players can encounter other players like a regular MMO, private groups where players can mingle only with chosen friends and not have to deal with other random players, or an online-only "Solo Mode" where players interact directly with NPCs only. Cross-platform play is not supported, but all platforms are linked to the same background simulation that drives the game's universe and any events that happen; thus, players across all platforms have a limited degree of influence on one another even if they do not interact directly. Finally, the game features an incredibly meticulous amount of attention to detail—Players can look around the cockpit of the ship they are flying, space stations have NPC traffic alongside player traffic, starfields are accurate to the player's position in space, and black holes feature gravity lensing.

Elite Dangerous was announced in 1997 as Elite: IV, but dwindling interest in space simulation games at the time, combined with a lack of funding for the game, ensured that the game remained Vaporware for 15 years, before Frontier obtained sufficient funding via Kickstarter in 2012 to develop it over the course of the next two years, and release it for the PC on 16 December 2014. A macOS port was released on 12 May 2015, but due to technical barriers, support for it was dropped on 11 December 2018. A port for the Xbox One was released on 12 May 2015, while a PlayStation 4 port was released on 27 June 2017; further development of both console ports was officially cancelled on 11 March 2022.

Several updates and Expansions for Elite Dangerous have been released since its initial launch, usually grouped into "seasons". After the first season of post-launch updates, the second season, named Horizons, was released on 15 December 2015 as a paid expansion, but was turned into a free add-on for all players on 27 October 2020. The third season, named Beyond, was released on 27 February 2018 and comprised four free updates released over the course of that year. Following Beyond, a number of standalone free updates were added in 2019-2020. The game's latest expansion, named Odyssey, was released for the PC on 19 May 2021, becoming a PC-exclusive expansion on 11 March 2022 due to the development of console ports being cancelled.

Hello Commander. You should take the opportunity to read these tropes while you are here: