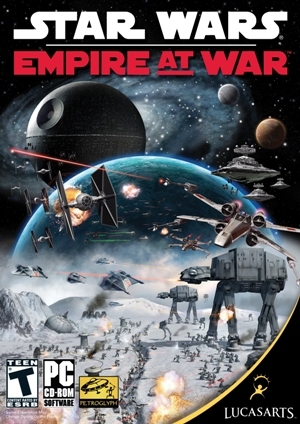 A 2006 Star Wars Legends Real-Time Strategy game developed by Petroglyph and published by LucasArts with the aim of eliminating the bad name Star Wars RTS games had acquired.

Empire at War is set between Revenge of the Sith and A New Hope, covering how the Alliance acquired their resources and the Empire's response, ending with either the destruction of the Death Star I or the Emperor congratulating Vader on the capture of five possible Alliance bases, respectively.

The expansion pack Forces of Corruption is set between the events of the destruction of the first and second Death Stars, following the story of the intergalactic crime lord Tyber Zann and his organization, the Zann Consortium.

Empire At War contains examples of the following tropes: