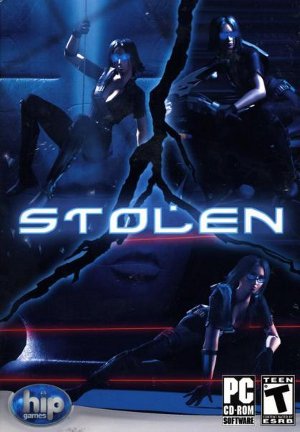 Not sure how stealthy a motorcycle is, but okay, we'll play along.
Infiltrate. Steal. Vanish.
Advertisement:

Stolen is a stealth-based game developed by British video game company Blue 52 and published in 2005 by Hip Games for PlayStation 2, Xbox and Microsoft Windows.

The player assumes the role of Anya Romanov, an acrobatic, high-tech professional thief living in the futuristic dark metropolis Forge City. Her initial mission is to infiltrate a high-security museum and steal items therein. She is assisted by the computer expert Louie Palmer, who communicates with her through an earpiece. Later on, however, Anya is framed for a murder she didn't commit, and soon finds herself involved a sinister conspiracy involving a ruthless corrupt politician Richard Killian, and her own deadly female ninja rival known only as Breeze.

This game contains examples of