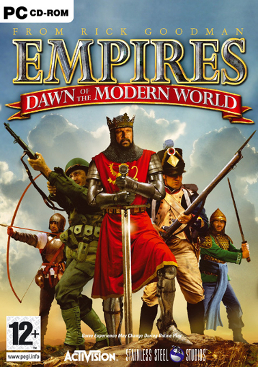 Empires: Dawn of the Modern World is a 4X Real-Time Strategy Game developed by Stainless Steel Studios and published by Activision, released in 2003. Unlike Stainless Steel's other production, Empire Earth (discounting the Art of Conquest expansion), it focuses on a much shorter period of time and a much smaller number of nations, a mere nine nations over five time periods compared to the 500,000 years of human history of Empire Earth.
Advertisement:

The end result was a game that was simultaneously a distillation and an expansion on what Empire Earth 1 was.

Tropes exclusive for this game