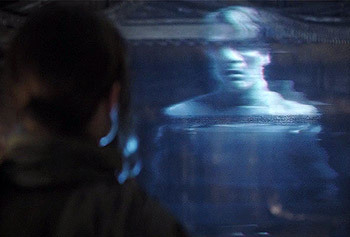 "I guess that's science fiction for you. They can travel faster than light at the drop of a hat, but still use non-error-correcting low bandwidth analogue radio signals."
— Darths & Droids Episode 1016

Holograms are cool, right? But they never seem to work right for whatever reason. Fizzing, popping, static, wobbly image....you'll be lucky if you get proper color! Would have thought they'd check these things at the factory, wouldn't you? But no, it seems like every last one of them has some sort of glitch. It's a wonder people put up with the things.

Related to Rule of Perception: A hologram has to look unreal, so the audience can see that it's a hologram; it's a visual equivalent of the Radio Voice. Also related to Holodeck Malfunction, and may suggest The Tape Knew You Would Say That if the protagonists are unaware they're talking to a hologram. Subtrope of Projected Man. However, it must be distinct enough that it's not simply mistaken for poorly implemented special effects. A poorly matched lighting or color for the surrounding environment on a Projected Man would not be inform the audience that he was a hologram, the assumption would be that it's an incompetent Chroma Key shot.

Many holograms falling under this trope are completely blue, perhaps a result of the famous A New Hope example below. Raster Vision, where the hologram appears to be made up of lots of little horizontal lines, is also common.

Note: To prevent us simply listing every hologram in fiction, be wary of adding too many examples of holograms that suffer minor blips during start-up or shut-down. Ensure that the example is intense enough to look like a real malfunction or interference of some kind.

One circumstance where this trope is commonly averted is when a Projected Man or other hologram is a regular fixture on the show, and for budgetary reasons it's easier to film them as actually physically present, with only very, very, occasional glitches on special occasions to remind viewers what they are.
Anime and Manga
Comic Books
Films — Animated
Films — Live-Action
Literature
Live-Action TV
Video Games
Visual Novels
Western Animation