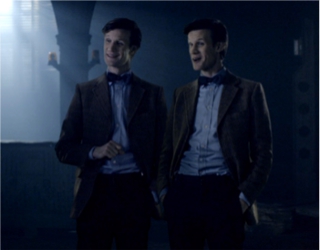 Me and Mr. Smith
"I have a plan, and it'll destroy them all."
— Ganger Jennifer
Advertisement:

The one with Eleven squared.

Continued from the last episode, and all-out war is going on between the human crew and their rogue Gangers, both of which fear the other group too much to stay rational. As the solar storm rages, Jennifer, a Ganger driven mad by the unnatural memories of being "decommissioned" over and over, is seeking revenge. As the crumbling factory fills with toxic fumes and drips lethal acid, the "originals" wait desperately for the shuttle from the Mainland to rescue them.

The Doctors tell Amy to breathe.

The Doctor's own Ganger has some initial glitches, but the Doctor calms him down and, as usual, effortlessly teams up with himself. He tells Amy that they can still be told apart because the original Doctor's shoes dissolved last episode, and he's wearing different ones now.

It turns out that the factory is full of discarded bits and pieces of Flesh... still fully conscious.

Amy is very freaked out by seeing the Doctor's Ganger. She treats him coldly and stops just short of "generated anomaly". The Doctor keeps asking her why, and she explains that the friendship she has with the Doctor can't suddenly be directed towards his Ganger, regardless of whether or not they have the exact same feelings and memories.

Amy sees the eyepatch woman again, and finally decides to tell the Doctor about it. He brushes her off. When the Doctor's Ganger takes her aside, she freaks out and asks him if he can die. Because she may have seen that, and the real Doctor invited her to come see it. The Ganger takes in that information, but is distracted when his innate psychic Time Lord powers pick up the screams of the decaying discarded Flesh. He heads back to confer with the Doctor, and hesitantly agrees to keep his distance from the main crew as a safety precaution.

Rory teams up with Jennifer, and is tricked by her to trap Amy, the Doctor and the remaining crew. Jennifer turns out to have had two Gangers, and the original her is long since dead.

Jennifer's remaining Ganger morphs into a freakish long-limbed monster. The factory is about to be blown up, and the Doctor reveals to Amy that he's not the Doctor at all. He's the Ganger — and has been all along. They switched shoes to see how Amy would respond to them. The Doctor's Ganger sacrifices himself while the Doctor, Amy and Rory escape. The two remaining Gangers are dropped off safely, together with the last living human crew member. They decide to let the world know what happened, together.

Back inside the TARDIS, the Doctor explains his reasoning for the switcheroo. And why he told Amy to "breathe" earlier. She's going into labour, or rather, her very pregnant actual self is. Amy was kidnapped before America, and has unknowingly spent months experiencing all her adventures through a Flesh body. The Doctor knew all along, because the Flesh has never been able to fool him. He just needed to know more about it before taking action: how it feels, how it works and how it can judge.

As the Doctor dissolves the Flesh of Amy's Ganger, telling Rory to be very brave, we cut to where Amy really is: on a bed, giving birth. The eyepatched woman who Amy keeps seeing through doors and walls is staring at her, real this time, happy that the baby is about to be born. Amy screams.