Recap / Doctor Who 2011 CS "The Doctor, the Widow and the Wardrobe" 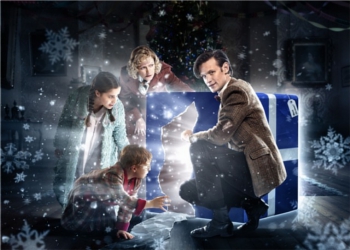 Typical Doctor, with his dimensionally impossible presents...
The Doctor: I can't see. I'm blind!
Madge Arwell: Oh no, love, no. I think you've just got your helmet on backwards. How did you manage that?
The Doctor: I got dressed in a hurry.
Advertisement:

The one where a widow is non-widowed and the Doctor put his helmet on backwards.

Written by Steven Moffat. The 2011 Doctor Who Christmas special. Has a prequel

The Doctor is blowing up a space ship. This is a bad idea, because space ships are generally in space, so he has to quickly improvise with putting on a space suit after being thrown out of the ship by the explosion. His respiratory bypass system comes in handy.

It’s Christmas Eve, 1938, when Madge Arwell finds a crater with a man in it. The man is wearing a space suit with his helmet on backwards and can't see a thing. He got dressed in a bit of a hurry, what with free floating in space and a ship exploding behind him and all. Madge tells her children, Lily and Cyril, that she'll be off for a bit: she has to take a man with a backwards helmet who may or may not be an angel to find a phone box. When they find the TARDIS (after several false starts), he tells her that he'll thank her properly someday, once the suit is done healing him.

Three years later, Madge's pilot husband is lost at sea in the war when his plane is trapped in the dark. Devastated, she escapes war-torn London with her two children for a dilapidated house in Dorset. She is crippled with grief at the news her husband has been lost over the channel, but determined to give Lily and Cyril the best Christmas ever and simply tell them later. She keeps up her Stepford Smiler act bravely.

When they arrive at the house, the regular caretaker has been replaced by the Doctor, who simply introduces himself as the new caretaker. He's very much playing The Wonka, and he's turned the house into a fantasy playground for the kids. The furniture moves, the beds are hammocks, and the Christmas tree is beautiful. There's one giant present underneath it. When the Doctor realises what has happened to Madge's husband, he agrees to help her give her children a wonderful Christmas.

Of course, little Cyril sneaks out of his hammock and into the giant present a day early. He ends up in the Whoniverse's equivalent of Narnia. It's wintery and gorgeous, and the trees look very Christmas-like, including decorative balls. Well, eggs. One of them bursts open, and Cyril follows whatever came out of it.

The Doctor and Lily quickly follow. The Doctor is confused — this is supposed to be the single safest planet in the galaxy. He had planned a nice holiday for the kids here, without any danger, and definitely without growing footsteps leading out of giant Christmas tree eggs. The Doctor's sonic screwdriver still doesn't do wood. When Trees Attack, this is a problem.

The creature leads Cyril into a tower, where he finds statues frozen in time.

Madge has followed them by now. She's greeted by Droxil (Bill Bailey) and his crew, wearing power suits and standing near an industrial Humongous Mecha from Androzani (Major, not Minor). Droxil votes to shoot her. His crew disagree — one of them has mommy issues and starts to involuntarily cry, and the other simply refuses to shoot an unarmed and shivering civilian woman. Madge is not unarmed, however, and forces the crew to let her inside their mecha.

The statues in the tower are made of wood. Cyril is invited to sit on their throne and wear their crown. He's discarded, however, because he's "weak". When Lily and the Doctor arrive, the Doctor is quickly discarded by them as well, but Lily is considered "strong".

Droxil informs Madge that they're a harvesting crew. The wood from the forest is the universe's best power source, and they're about to go melt the forest with acid rain. Madge is shocked and tells them that they need to save her children before it's too late, but it's impossible: the mechanism is already in place and can't be stopped now. As a last-ditch resort, Madge begs to be allowed to pilot the mecha towards her children. She doesn't care that it takes years to learn: she was in her husband's plane once, and she's a Mama Bear, and with those two things combined she can do anything. The crew tell her that she's mad, but she absolutely insists.

As it turns out, the tree statues are not statues: they're the souls of the trees that are about to be murdered. The tower is not built, but grown, as their safe haven. They've left their tree husks to go find a new world somewhere else. The Doctor loves it, and tells them to hop on inside his head and get on with it. Trees are good, he loves trees, one of them fancied him once, but the trees refuse: it has to be someone who's "strong", and Lily isn't mature enough yet.

As the acid rain starts, all hope seems to be lost, but the giant mecha comes stumbling out of the forest and towards the tower. It's piloted by Madge. The thing falls over, of course, but Madge manages to get out of the mecha and into the tower with only a few gaping acid holes in her coat. The trees latch onto her immediately. She's the strongest creature there is: a grown mother. As it turns out, the trees are speaking the universe's base language: "weak" means male, and "strong" means female, simply because females beget new life. "How else does life travel but the mothership?" Madge is quite happy to serve as the vessel for the trees and power up their transportation. The souls of the entire forest are absorbed into her head. She takes it extremely well. With the powerful thought of "home" to lock onto, the heroes and the tree collectively depart into the Time Vortex.

Trouble brews on their way because the thought of "home", for Madge, includes her husband. As her thoughts are projected before her eyes, she realises that she will also need to remember her husband vividly if she wants to get the trees to safety. She has to see him die, and his final minutes on his plane will be shown to her kids as well. It can't be helped, the Doctor says, and as they make it to safety and the trees leave her mind again, Madge breaks down into tears.

The Doctor decides to give the family some privacy while Madge explains to her kids what happened to their dad. She's interrupted when the Doctor rushes back in again, rambling about something outside that they need to see. Outside on the grass is a plane. Madge's husband gets out, very confused, but happy to see his family. When Madge moved through the Time Vortex, locking onto her husband in thought, the guiding light of the trees' vessel was able to guide his plane to safety right through time and space. Madge and her family cry, and the Doctor smirks at their all-too-human happy tears.

Back at the house, Madge finds the Doctor in the attic, tinkering with things. She sees the TARDIS and instantly realises that he's her space suit angel. When she asks if he doesn't have his own family to go spend Christmas with, he tries to explain to her that everyone thinks he's dead. Madge gets very cross at that, and tells him to go back to his mum and dad and tell them he's sorry, right now. He sort of smiles and says he'll think about it.

Amy opens the door and sees her son-in-law standing there quite sheepishly. He's not quite sure how long it's been. Two years, she informs him (again), and they knew he was alive. Their daughter told them because she's a good girl. Neither of them wants to give the first hug, but after about a minute, they both laugh and relent and hug each other. As Amy invites him in for Christmas dinner with her and Rory, the Doctor notices that his face is a bit wet and that happy tears may not be just a silly human thing.

The Doctor: But you didn't know I was coming! Why would you set me a place?
Amy: Oh, because we always do.