Recap / Doctor Who S32 HVBS "Night and the Doctor" 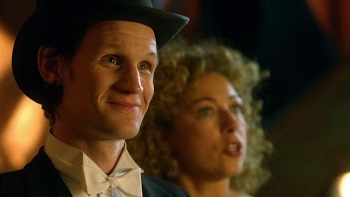 An older Doctor tries to smile even though he's about to go on his supposed final date with River.
Advertisement:

The one where the Doctor is guilt-tripped into chickening out of Darillium.

Five additional scenes written and produced for "The Complete Sixth Series" boxset, which examine the question: what does the Doctor do at night, when his companions are asleep?

The episodes resolve some of the plot threads set up in "Silence in the Library".

Like "Space" and "Time", these minisodes are all Bottle Episodes, and the first four are also Minimalist Cast episodes.

Not to be confused with "The Night of the Doctor".

Amy answers the TARDIS phone one night, and gets the Prince of Wales on the line. She absently swats a fly while trying to figure out what's going on. The Doctor arrives shortly after, carrying a fish bowl and getting quite cross at Amy for touching his phone, and for swatting a fly that was really a transformed warlord. As Amy tries to get through to the Doctor about the fact that she can't sleep and why, the Doctor suddenly looks horrified and yells out to River (outside the TARDIS) about the fact that the fish is not, in fact, the Queen, but an ordinary fish. He delegates Amy's emotional troubles to a very sleepy Rory while dashing out again.

The Doctor comes home from a party one night to find Amy waiting for him. She still can't sleep; there are two timelines in her head, one with her parents and one without, and she doesn't understand why this isn't a problem. She feels that the Doctor's human friends are just little blips in his life, and even Rory's Auton memories are flighty at best. The Doctor tells her that the parts with his friends are the only parts of his life that matter, the only parts he remembers. He then hooks her up to the TARDIS telepathic link and has her look at her saddest memory — which consists of her dropping an ice cream when she was little. As the TARDIS brings them to that time and place, the memory changes to a nice red-headed lady in a nighty buying her a second ice cream. The Doctor takes her out to go do just that.

The Doctor and River have their very first date since their wedding, during her first night of imprisonment in Stormcage. Declining the "daring" dress he got her River disappears into the TARDIS to change, when a second River appears, who's been in Stormcage for five years. She comes in fleeing a battle, makes fun of the dress, and disappears into another section of the TARDIS. The Doctor tries to prevent them from meeting each other in order to prevent paradox, eventually sending the five-years River back to Stormcage. A third River walks in, this time wearing the dress, followed by an older version of the Doctor. He's going to take her to see the Singing Towers of Darillium — he's been promising for ages. The Doctor remembers River saying that this was their last date before River's death in the Library, and with much sadness in his expression, he wishes his older self good luck. His older self wishes him good luck with their first date as well, and the youngest River happily dashes into the control room again after the older two have gone.

Sophie prepares to leave for the weekend, and Craig is worried about whether or not he'll be able to take care of Alfie.

Tropes regarding "Up All Night":

Alternative Title(s): Doctor Who S 32 E 15 Night And The Doctor