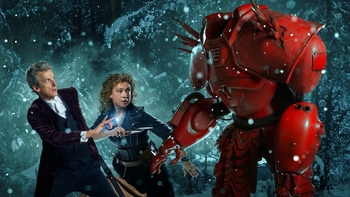 The Damsel in Distressnote Yes, we mean the Doctor. and the Professor versus the (headless) Butcher of the Bone Meadows.
Click here to see the Radio Times magazine poster for this episode: 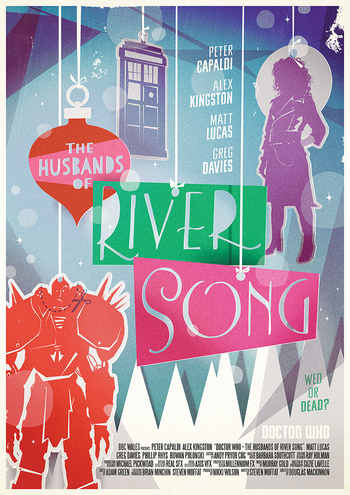 Carol singers will be criticized.
"When you love the Doctor, it's like loving the stars themselves. You don't expect a sunset to admire you back. And if I happen to find myself in danger, let me tell you, the Doctor is not stupid enough, or sentimental enough, and he is certainly not in love enough to find himself standing in it with me!"
— River Song, not knowing that he is standing right next to her.
Advertisement:

The one that closes the book on the tale of River Song... from where it all began.

Written by Steven Moffat. The 2015 Doctor Who Christmas Episode.

It's Christmas Day, 5343, on the human colony Mendorax Dellora. A man walks up to the TARDIS and knocks on the door, despite the sign warning away any carolers. The Doctor, when he opens the door, turns out to have been unwittingly given holographic antlers. Nardole, the man who knocked on the door, is a bit confused about that. He's come looking for the surgeon — there's a medical emergency. So the Doctor agrees to come see what the emergency is. After they leave, a man walks into the street, asking if someone called for a surgeon.

There's a spaceship crashed outside of town. When the Doctor and Nardole arrive, a woman in a long, red hooded cloak comes down the ramp to greet them. She's the one who called for a surgeon. She's also Professor River Song, and her husband is dying. The Doctor is understandably surprised by this news. River is not pleased that the surgeon she hired knows who she is and addresses her by name — she's trying to keep her identity secret — and threatens to remove the organs of the next person who calls her by name. In alphabetical order. The Doctor wants to know which alphabet.

River's dying husband turns out to be the tyrannical King Hydroflax. He has bodyguards with genetically-engineered anger problems, and is practically worshipped by his billions of terrified subjects, who are watching to see the results of the surgery. Hydroflax has the universe's most valuable diamond lodged in his brain. It got stuck there while he was leading a raid. River turns out to have married him because she wants to steal it. She's even arranged a buyer. The surgeon she hired, who was in on the plot, was supposed to remove the diamond, that's all. River would rather Hydroflax didn't survive this. The Doctor is rather disturbed by this plan, and also surprised River hasn't realized who he is yet.

It's at this point in the conversation that Hydroflax angrily intrudes, and reveals himself to be a head attached to a robot body. River and the Doctor wind up taking the head hostage and teleporting away, leaving the robot body with a terrified Nardole to interrogate. River and the Doctor land in the forest, and River's not too pleased at the Doctor's amusement about the fact that they're being threatened by a head in a bag. Shortly, River's other accomplice, Ramone, turns up. River married him, too, and then wiped his memory of the marriage because he was "getting annoying". Ramone tells River that there's no sign of "Damsel" in town. The Doctor is rather taken aback to discover that's River's code name for him.

The Doctor and River head for the TARDIS, parked in town. Hydroflax's robot body follows in pursuit, having taken Nardole's head hostage. At the TARDIS, River reveals she's "borrowed" the TARDIS without the Doctor's knowledge on many previous occasions, to his surprise. She also gives him the most unnecessary forewarning in the history of the show about the discrepancy between the inside and outside of the ship. The Doctor takes advantage of this, and River's continuing ignorance of his identity, to give the hammiest ever "reaction" to the TARDIS' interior. He thinks that's how everyone ought to react. It also transpires that River has a liquor cabinet behind a roundelle in the console room he didn't know about.note In "Twice Upon A Time" we learn that the First Doctor had a similar one in his console room, so the Twelfth Doctor may just not have realized it was still there or that River knew about it.

The TARDIS can't take off with only Hydroflax's head on board. The rest of his body's caught up, however, and the Doctor tricks it into getting on board. The TARDIS takes off for River's destination, the interstellar cruise liner Harmony and Redemption, where she's planning to meet the buyer for the diamond. The ship is a haven for the wealthiest murderers around, where genocide comes to kick back and relax. Even the staff are required to have a history of indiscriminate slaughter.

River's buyers aren't after what she thinks they are. So how will the Doctor and River escape the ship? And when will she finally realize who the Doctor is?

This episode has several elements of note:

The Doctor Gets Christmasy

Fitting its nature as a Christmas episode, the title sequence for "The Husbands of River Song" features added snow, ice, and Christmas ornaments in the visuals and sleigh bells in the music.

The Doctor Gets Christmasy

Fitting its nature as a Christmas episode, the title sequence for "The Husbands of River Song" features added snow, ice, and Christmas ornaments in the visuals and sleigh bells in the music.