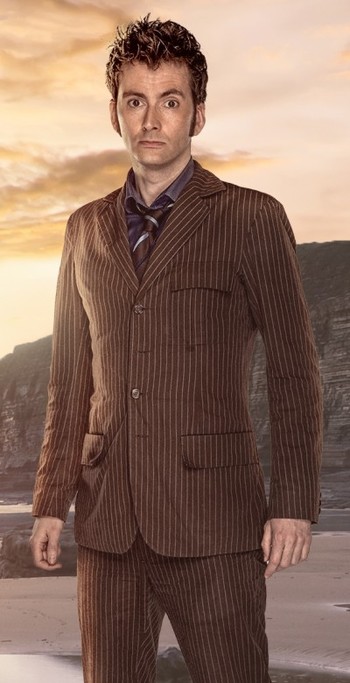 The scruffy, witty, and somewhat Mulder-ish heartthrob, with great inner fury and wistful melancholy concealed under his easygoing attitude. An accidental and often reluctant Chick Magnet, the Tenth Doctor started out rather manic: prone to speaking very quickly, peppering his speech with pop culture references and foreign words, and going off on long rambling tangents.

Despite his bubbly personality, he didn't hesitate to lay down the law, much like his predecessor did (later Doctors would behave much more diplomatically); he invariably subjected his foes to a Fate Worse than Death if they passed up the one chance at redemption he always offered, and in some cases he would end up acting as Judge, Jury, and Executioner (self-appointed, mind you, by virtue of being the last remaining Time Lord) in the heat of the moment, to the point where his own capacity for ruthless actions in the name of the greater good would occasionally leave him scared and him questioning his own morality afterwards.

He despised his past selves for their role in the Time War, and was always at his coldest when confronted with it. He held deep respect for pacifism, and remembered how nice Gallifrey used to be, and how much he hated the corruption of Time Lord society into warmongers. He had zero tolerance towards anyone who wanted to engage in violence to resolve conflicts and disapproved of guns unless they were unquestionably a last resort.

As mentioned on the Fourth Doctor's page, Ten is widely regarded as one of the most iconic portrayals of the Doctor in the revived series, thanks in no small part due to his much more human and empathetic, yet still frighteningly alien personality depicted during his tenure.

Tropes associated with the television series:

Tropes associated with Doctor Who Adventures

In cooperation with licence holders AudioGo, Big Finish made Ten the central character of the Destiny of the Doctor story "Death's Deal".

In 2016, David Tennant started reprising the role for a series of full-cast audio dramas, featuring more adventures from his time with Donna and Rose.

When the Doctor and Martha were being chased through time by the ravenous Family of Blood, the Doctor decided to take a human disguise by sealing his Time Lord essence inside a chameleon arch, which looks like an ordinary fob watch, and hid in an inconspicuous English village in 1913. The process is much more than a disguise, however, as the chameleon arch completely rewrites a Time Lord's biology into a human form. With falsified memories, the history teacher John Smith was, for all intents and purposes, not the Doctor at all but a completely new man with a life of his own.

He appears only in the two-part storyline consisting of "Human Nature" and "The Family of Blood", both self-adapted from Paul Cornell's 1995 novel Human Nature which follows an identical premise, but instead features the Seventh Doctor as "John Smith".

"I don't want to go."
Feedback