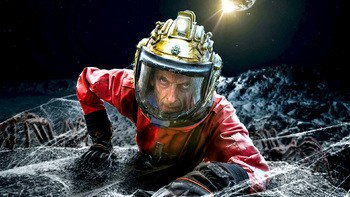 War? On the moon? It's more likely than you think.
Click here to see the Radio Times magazine poster for this episode: 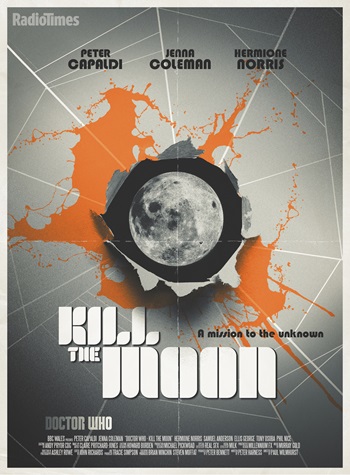 Mission to the unknown, you say? You may wanna reconsider that suggestion... the last one didn't go so well.
"There are some moments in time I simply can't see. Little eye blinks. They don't look the same as other things. They're not clear, they're fuzzy, they're grey. Little moments in which big things are decided, and this is one of them."
—The Doctor
Advertisement:

The one where the Doctor almost gets five across the face, and a Tagalong Kid tosses her cookies.

Hungry yet? Don't be, 'cause this story's also got Big Creepy-Crawlies up the wazoo. Not the time to be chomping down popcorn... that is, unless you're into that sorta thing.

What time is it? Adventure time! With Clara, the Doctor... and Courtney! See, as it turns out, after the Doctor showed Clara's wayward pupil the stars in the last episode, he informed her that she wasn't special, before unceremoniously booting her out. Courtney handled that as well as you could expect, and now she's off sulking and buying booze with the Doctor's psychic paper. Clara's none too pleased about that, and promptly brings Courtney back to the TARDIS so the Doctor can fix his mistake, and admit she's special after all.

The Doctor doesn't do that, because that's the boring way, but one of the perks of being a space-and-time-traveller is that if somebody needs to be special, he can make them special. "Courtney the First Woman on the Moon" has a really nice ring to it.

So the TARDIS zips off to the Moon, landing neatly in 2049 on a shuttle that appears to be heading there itself...with 100 nuclear missiles inside it. The shuttle's staffed by the remnants of Earth's space programmes. Earth collectively shrugged its shoulders when it came to space exploration some years back, and there haven't been many missions up there in quite some time. So what is up there? Mysterious fissures, getting wider and wider; decrepit moonbases filled with desiccated corpses; an excess of gravity causing a great many problems on Earth (hence the shuttle, to rid the moon of excess mass and restore the seas to mostly normal) and spider-like aliens with sharp teeth, who want to find out how you taste.

For humanity, the astronauts, Clara and even Courtney, an impossible choice: Kill an innocent, or doom the entire Earth...