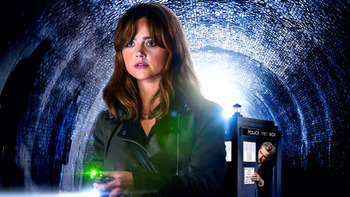 The walls are alive... and closing in fast.
Click here to see the Radio Times magazine poster for this episode: 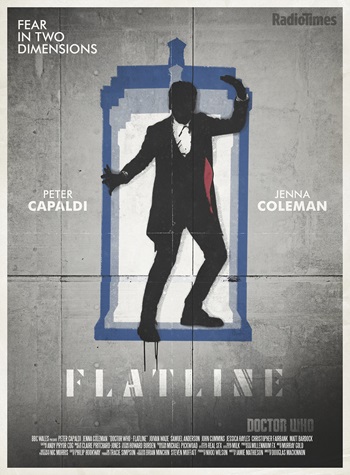 Street art gone wibbly. Perspective gone wobbly.
"I tried to talk, I want you to remember that. I tried to reach out, I tried to understand you, but I think that you understand us perfectly. And I think that you just don't care! And I don't know whether you are here to invade, infiltrate or just replace us. I don't suppose it really matters now, you are monsters! That is the role you seem determined to play, so it seems that I must play mine! The man that stops the monsters!"
— The Doctor
Advertisement:

The one where the Doctor joins The Addams Family.

Written by Jamie Mathieson, this is the annual Doctor-lite episode, although less Doctor-lite than the previous examples.

Once again, things appear to be back to normal, in a show where "normal" means "an angry Scottish alien and a tiny schoolteacher whiz around space in a wooden box." After coming close to leaving the TARDIS for good, Clara's decided to stick around after all, and it seems like she and the Doctor are back into the adventuring groove.

Even better, it seems that Danny's OK with his girlfriend running around and saving the universe, too - although he won't let her leave her stuff on the TARDIS, which seems a bit weird, but frankly their relationship's far too human for the Doctor to be bothered probing into it. So while Clara gathers her bags and calls up Danny, the Doctor gets on with dropping her off home.

Rather, homeish. Once again, he's dropped her a bit far out – actually, they’re in Bristol, in what seems like a council estate.

There’s a bigger problem. The TARDIS is now about four feet tall, and the Doctor has to stoop to get out. Something’s sucking on the outer dimensions, forcing the TARDIS smaller and smaller like a worn-down gobstopper in somebody’s cheek.

By the time the Doctor’s figured that out, he’s gone back inside and got stuck. With the TARDIS now about the size of an action figure (leaving Clara with her very own Doc in a box), one more problem’s shown up – people’ve been vanishing, all over the estate. There are creatures in the walls – creatures that live in two dimensions, that can flatten you down and wear your skin. Maybe they think they’re being kind, or maybe they just feel like it. The Doctor isn't sure yet.

Either way, with the Time Lord out of the picture the role of "the Doctor" needs to be filled, and fast. There's even a nice-but-dim graffiti artist and his curmudgeonly parole officer to serve as her impromptu companions...

Clara: Come on, why can't you say it? I was the Doctor and I was good.
The Doctor: You were an exceptional Doctor, Clara.
Clara: Thank you.
The Doctor: Goodness had nothing to do with it.