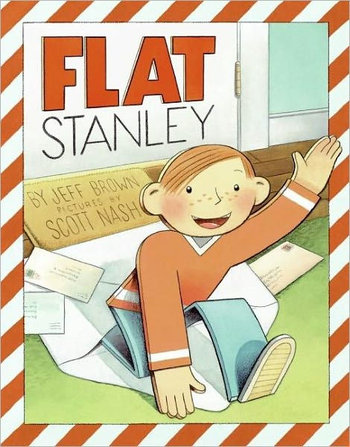 Flat Stanley is a children's chapter book written by Jeff Brown. It was originally published in 1964.

Stanley Lambchop is your ordinary kid. That is, until one night, a bulletin board in his bedroom falls on him while he's sleeping. His younger brother Arthur calls his parents up to Stanley's bedroom to see if Stanley's hurt from the bulletin board, which thankfully he isn't... but the incident did leave him Squashed Flat! Until he can find a way to inflate himself back to normal, Stanley must get used to living life as a flat person.

The book has five sequels:

, an educational project where kids send paper cut-outs of him to different locations and have records of his adventures sent back to them.

Flat Stanley and its sequel books provide examples of: