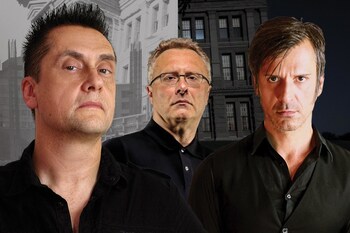 Die Krupps is a band from Düsseldorf, Germany, founded in 1980 by Jürgen Engler and Bernward Malaka. They are regarded as the Trope Makers for Neue Deutsch Härte, though they call their style Metal Machine Music because their albums all sound quite different from each other— the only consistent elements are metal guitar, synths, and the Steelophone (a set of metal pipes attached to a frame and played by hitting them as hard as possible with metal sticks).

and industrial corporation. As such, many of their songs are about factory work and/or politics.

Their lineup has varied a great deal over the years, and Malaka has since left the band, but vocalist and Face of the Band Jürgen Engler has kept his position through the band's entire history. Die Krupps have collaborated with a large number of other artists in EPs, remixes, and concerts, including Front Line Assembly, Unheilig, Funker Vogt, The Sisters of Mercy, and Nitzer Ebb. Ralf Dörper left in 1982 to form Propaganda, but subsequently returned.

was played a lot on MTV during The '90s.