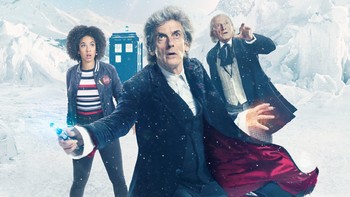 "Can't I ever have peace? Can't I rest?"note From left to right: Bill Potts, The TARDIS, the Doctor and the Doctor. Not pictured: A captain and the Doctor.
Click here to see the Radio Times magazine poster for this episode: 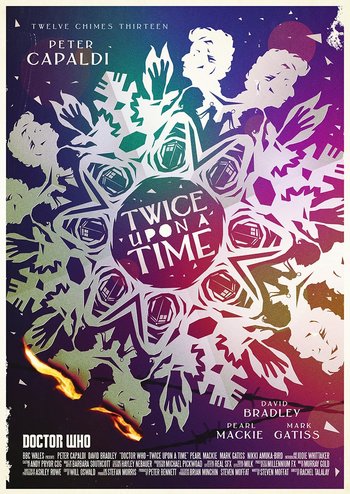 "What happens now, where I go now, it has be alone."
Twelfth Doctor: Why are you trying not to regenerate?
First Doctor: I have the courage and the right to live and die as myself.
Twelfth Doctor: Too late, it's started. A few minutes ago, you were weak as a kitten, right? Now you're fine. We're in a state of grace, both of us, but it won't last long. We have a choice. Either we change and go on, or we die as we are.
Advertisement:

The one where Twelve plus One equals Thirteen.

"Once Upon a Time, the Doctor refused to regenerate... twice."

"Previously on Doctor Who... 709 episodes ago", the First Doctor was in the midst of a confrontation with a bizarre new race of cyborgs, the Cybermen of Mondas, at an Antarctic military base and his old body was wearing a bit thin. Realizing he would soon be regenerating and terrified of what this would mean for his future, he wandered off into the Antarctic snow, far from his companions Ben and Polly.

Previously on Doctor Who... one episode ago, thirteen lives and a new regeneration cycle later, the Twelfth Doctor stumbled out into the Antarctic wastes and barely managed to put off his regeneration yet again. He had been barely saved from his final death in a battle with the Cybermen on a gigantic Mondasian colony ship, knowing Nardole would be looking after the colonists who were taken to safety. But he also believed his beloved companion Bill Potts to have died in a Heroic Sacrifice as one of those Cybermen and his childhood friend and fellow Time Lady Missy (the Master) to have forsaken a Heel–Face Turn. At this point, the Doctor was tired of changing — tired of life itself. After everything he's gone through in this incarnation, Twelve has hit his breaking point and just wants to die permanently. So the TARDIS brought him to this familiar snowy waste to prove a point...

And thus these two Doctors cross paths. And then time freezes, a British army captain from the First World War appears in their midst, and a mysterious Glass Woman appears after that...

The Glass Woman is part of the Testimony, a mysterious construct that is kidnapping humans throughout time and space — taking them in the final moment of their lives to download their memories before returning them to their fates, and capable of creating avatars of these people from said memories. The Captain is just one of their latest subjects, and the Testimony insists on returning him to his proper time and death. The Doctors have something to say about all this kidnapping and are determined to figure out what the Testimony's grand design is; accompanied by an avatar of Bill Potts herself, they and the Captain escape to find answers.

Is there really hope for the Captain? Is a person truly the sum of their memories? What will it take to convince the original Doctor to embrace a future that will be marked by violence and sorrow? What will it take to convince his later self to keep going after that future has become the past? And with all the lessons they learned in this life, what kind of person will the Twelfth Doctor become after this adventure?

Written by Steven Moffat, the 2017 Christmas special is the end of an era in many ways: