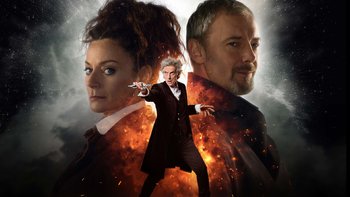 The Day of the Master.
Jorj: Who are you?
Missy: Well, I'm that mysterious adventurer in time and space, known only as Doctor Who, and these are my disposables — Exposition and Comic Relief.
Nardole: We're not functions.
Missy: Darling, those were genders.
Advertisement:

The one where the genesis of the Cybermen and the undoing of a companion are revealed.

Written by Steven Moffat, this is the first half of the two-part Series 10 Season Finale of Doctor Who. Its denouement also continues into the 2017 Christmas Episode to form, in total, a three-part Grand Finale for the Twelfth Doctor (Peter Capaldi).

This is the story of how the Twelfth Doctor died...

The Doctor and Missy's relationship has evolved since he chose not to execute her. After decades of imprisonment in the Vault under his watchful eye as he kept to his 1,000-year vow, she seems to be on the verge of a Heel–Face Turn. Few things would please these two Time Lords more than to be friends again, as they were before madness of others' making sent her down an evil path. But the Doctor knows that he must be careful — Hope Is Scary, and seductive.

To Bill and Nardole's anxiety, the Doctor decides he will test Missy's sincerity and capacity for good, inspired by a long-ago promise they made to each other to see the universe together. He brings the TARDIS to a gigantic spaceship in need of aid: It is caught in the gravitational pull of a black hole. But Missy will be filling his role — down to his name — while he hangs back in the TARDIS to observe her actions and interactions with both Bill and Nardole and the crew of the ship, coaching the trio by earpiece as required. After all, the universe shows its true face when it asks for help, and those who are asked show their true faces in how they respond.

As you can probably guess, lots of trouble occurs. The true Doctor joins the fray, but too late to save Bill from being shot — through and through — by an anxious alien technician. From there, her body ends up transported to the other end of the ship, which is 400 miles away and unreachable via TARDIS because the ship, ever since it became trapped in the black hole, has been suffering Time Dilation caused by gravitational pull. Luckily, she is in a hospital and soon up and about again! Unluckily, time is flowing much, much faster at Bill's end than at the Doctor's: ten minutes for him, Missy, and Nardole is 2.84 years for her. Moreover, this hospital is ministering not-so-tenderly to the humans of the planet Mondas — Earth's long-lost twin. This Dying Race is "evolving" to survive the physical effects of dilation via artificial limbs and organs. And since her heart was vaporized, Bill has already been forced to take the first steps toward a full "upgrade".

When, not if, the Doctor, Missy, and Nardole reach Bill by travelling through the ship itself — the Doctor will not let his beloved companion pay the price for his decision to test Missy if he can help it — they will also find the first generation of Cybermen and another Master waiting for them. It's Missy's previous self. You know, the one who can't decide whether you should live or die.

And with this, the story continues in "The Doctor Falls"...