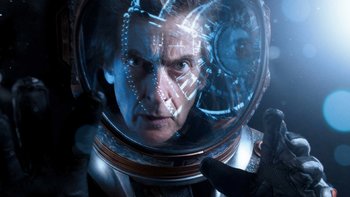 "Four survivors, one distress call. The universe shows its true face when it asks for help. We show ours by how we respond."
Click here to see the Radio Times magazine poster for this episode: 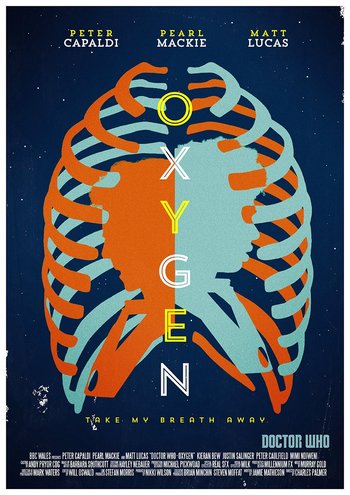 The song by Berlin comes to mind, doesn't it?
"Doctor, if those suits have killed thirty six people, that means there's thirty six corpses walking about this station!"
— Nardole
Advertisement:

The one with a man who looks suspiciously like a young Yondu.

The Doctor has grown restless over the decades, (mostly) keeping to Earth and watching over the Vault and its mysterious occupant. On the spur of the moment he suggests a "camping trip" and brings up a map on the TARDIS for Bill to pick the location — and then he notices one location on the map that is sending a distress signal, a space station of the far future. Wanderlust and a call to help? How can the Doctor resist, even as Nardole and Bill do — all the more as it becomes clear that Chasm Forge is a most dangerous place?

This is a mining company rig where the crew members are being murdered one by one. They are being stalked and killed by none other than the corpses of those who died before them, who still walk thanks to their "smartsuits". And there is more. Oxygen is a most precious commodity in the depths of space, and there's little "licensed" oxygen left within the station; everyone must wear smartsuits to survive inside and outside, and the oxygen supplies of these are running dangerously low. Their only hope seems to be to find a place that can isolate them from their pursuers where they can wait for rescue, but is there anywhere left to hide?

The Doctor must save whomever he can on this doomed rig, but that is not his only responsibility. He knows that he must keep Bill and Nardole, who never asked for any of this, who pleaded with him to turn back, safe and alive... no matter what the consequences might be for him.