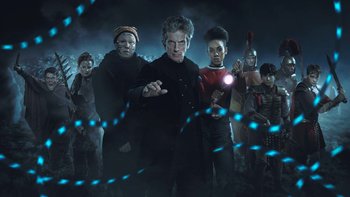 "Where is my friend, and what destroyed the Roman army?"
"Now you have a choice. You can all keep on slaughtering each other till there’s no one left standing, or you can GROW THE HELL UP!"
— The Doctor
Advertisement:

The one where popcorn saves the day.

Written by Rona Munro, who previously wrote "Survival", the final serial of the original run of Doctor Who. With this episode, she became the first person to write for both the old and the new television series (and in all likelihood, the only one, given that most of the other Classic Series' writers were either retired or dead by this point).

The Doctor and Bill Potts, with a confused Nardole in tow, have arrived in ancient Scotland. The teacher and his pupil have a bet going regarding what became of the Ninth Legion of the Roman Army, which vanished without a trace here. He believes they were slaughtered to a man; she believes they simply left their posts. They split up, Bill vowing to return with a live Roman soldier...

She finds one, but only after being pursued by Kar, a Pictish lass. And the soldier doesn't last long before falling to a monster whose most distinctive feature is its glowing tentacles. Soon she ends up in command of the soldier's fellow men, all of whom are deserters. They know of the monster too — for it ravaged the Ninth Legion. The Doctor and Nardole have just seen the site of that slaughter when they are captured by Kar and her people.

Escaping and investigating a nearby cairn, the Doctor comes to realize that this creature feeds upon sunlight and anything that contains it — including humans. Within the cairn, it lies in another dimension behind a gate that opens for a few moments with every sunrise. Kar is actually the latest Keeper of the Gate, tasked to keep the creature from emerging by fighting it back — but she was so desperate to stop the Roman invaders that she sicced it upon them. Alas, having not fed for a long time, its hunger is ravenous. If it cannot be forced back to from whence it came, it and its kin will ravage this dimension until not a star is left in the universe. The Doctor has a plan, but it will require both the surviving Romans and Pictish to join forces... and something more besides, something he's not willing to tell Bill...