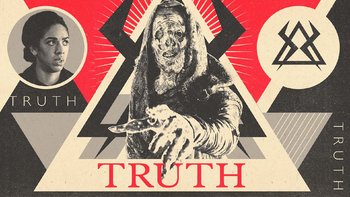 Dare is not an option, in case you were wondering.
"I can't remember how I escaped, Mum. I asked for their help and then, and then there's nothing. And then I woke up and the Monks were here, and they'd always been here. Everything they told us, all that we believe now, is a lie. But I don't understand it, because no-one's saying anything. It's like, like they've been brainwashed. I travelled with a man called the Doctor and his friend Nardole, and I did this to save him. I'm trying to stay strong without them, but every day it's harder to remember what's real any more. And I know, I know how it looks, Mum, with all of the stuff that he's been saying on the telly. But it's all right, because I know he has a plan. One day soon, he's going to come back and save us all."
— Bill Potts
Advertisement:

The one where the Doctor and company consult the Missy-in-a-box.

The conclusion of the three-part "Monks Trilogy" that began with "Extremis". Written by Toby Whithouse.

In the previous episode's Cliffhanger, Bill Potts consented to let the Monks conquer Earth in exchange for the Doctor, halfway around the world and about to die in a lab explosion that would save humanity, having his sight restored so he could unlock a door to freedom. Over the phone, she told him "Tell you what old man... you better get my planet back." Her consent was born of the pure love the Monks needed to conquer — her love for the most remarkable person she ever knew, the one man who could save her world.

But the Monks told him telepathically, as he watched the lab burn, "Now see our world"...

Six months later, Bill Potts is back in London. Earth is now a giant police state where the Monks not only walk the streets alongside humans but are adored as benevolent rulers, with statues in every great city. After all, they've always been on Earth, protecting poor lowly humanity from every threat that it ever faced and helping them achieve all it has, haven't they? Bill knows that's not true, but few others do and they quickly become targets of "Memory Police" if they dare speak up. And as for the Doctor? He is the Monks' greatest propaganda tool — never seen in public, only on television, speaking of the "Truth".

Reuniting with the Doctor's "valet" Nardole, one of the few who still sees the real truth, this pair must undertake a mission to a prison ship to rescue the Doctor and see if he can be reasoned with. They will also have to open the Vault and seek the help of Missy, one of the most dangerous criminals in the universe, but also the Doctor's oldest friend and the only person who might have knowledge of the Monks' weaknesses. And either the Doctor or Bill might have to pay the ultimate price for humanity's freedom...and possibly at the hands of the other at that.

(The Doctor also crashes a boat. Just because he can. And because stealth is boring and not him in any way...) 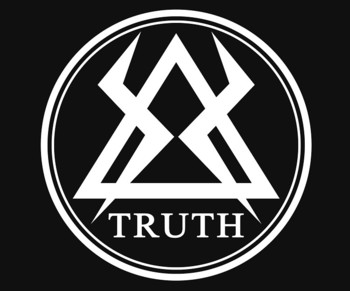 Reader. You are charged with the viewing and possession of propaganda intended to undermine the True History. This is in contravention of the Memory Crimes Act of 1975. Therefore you are sentenced to ten years in a labour camp.