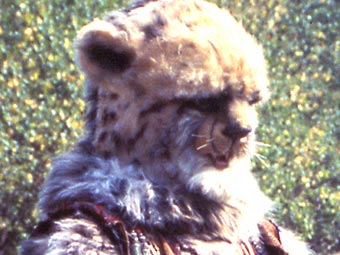 "Doctor, look! Furries!"note No, folks, in all seriousness, we'll miss the Classic Era. Well, apart from the dodgy costumes, that is. (Beat) Ahh, o-kay, especially the dodgy costumes.
"There are worlds out there where the sky is burning, and the sea's asleep, and the rivers dream. People made of smoke, and cities made of song. Somewhere there's danger, somewhere there's injustice—and somewhere else, the tea is getting cold. Come on, Ace, we've got work to do!"
— The final monologue from the Seventh Doctor for this episode, and the final lines of Classic Who as a whole.note It was edited in once they knew the show had been cancelled. The way the Doctor moves out of sync with the words being spoken gives it away.
Advertisement:

The last one. For 16 years, anyways.note Not counting the movie.

Written by Rona Munro. This three-episode serial first aired from November 22 to December 6, 1989.

After adventuring throughout time and space, Ace finally asks the Doctor to take a visit to her hometown — Perivale.note Not to be confused with Peri Brown or misconstrued as the home of Peri Brown that happens to have a Meaningful Name- number one, she's an American who obviously did not grow up in an English burg, number two, she's currently with King Yrcanos... well, in at least one continuity. As it turns out, not much is the same since Ace left the town originally and many of her friends have just up and left. The Doctor, however, takes a curious interest in a black cat that seems to be following them around, and while he tries to set a trap for it Ace finds herself poking around a playground when an anthropomorphic cheetah-person riding a horse chases her around the park. Not long after this scene, the Doctor and Ace are whipped away to an exotic alien planet where the Cheetah people come from — and where Ace's friends and a few other extras have been whipped away to. The Doctor is then escorted to the Cheetah people's leader... the Master. And this time, he's acting very darkly. That's what happens when you're allowed to cut loose for the final episode and portray the character as you originally intended without a heaping helping of Camp thrown in to belay complaints that the show is getting too violent for its britches, since, by now, it really doesn't matter, does it?

As it turns out, the planet is some sort of living entity (maybe?) that is slowly infecting the people on the planet with an urge to fight, kill and destroy one another. The Master has already been infected, sporting some neat cat eye contacts, and simply desires to leave the planet. Meanwhile, Ace and her friends are hunted by the Cheetah people and do their best to simply run away. The Doctor and Ace finally meet up again just in time for the Cheetah people to pull an ambush and kill a few of the extras — but not before Midge kills one of the Cheetah people and turns more and more feral.

Separated from the Doctor, Ace meets one of the Cheetah people and kinda befriends her. As it turns out, Ace is also slowly starting to fall to the spell of the planet and is now also sporting those neat contacts. Meanwhile, the Master uses Midge to escape from the planet back to Perivale. The Doctor also uses Ace, after warning her of possible consequences that don't apply to her as she's a main character, to get everyone back home. Waiting for them is the Master, who has taken the time between the two groups arriving to harness the power of a male youth group to challenge the Doctor to motorcycle-jousting.

Either way, the Doctor and the dreaded feral Midge drive at one another and randomly blow up their bikes. The Doctor survives without a scratch while Midge suffers a Critical Existence Failure and dies. Suddenly, the youth group advances on Ace, until that Cheetah person from earlier shows up and tries to chase off the Master. By hugging him. Of course, the Master kills her and meanders off to go steal the TARDIS. There, he encounters the Doctor — and then drags the Doctor back to the now-collapsing-for-some-reason planet where they fight it out in hand-to-hand combat. The Doctor himself sports those adjusted eyes until he realizes that the fighting is killing the planet and that the only way to win is to not fight. The Doctor is whisked away back to Earth and the Master is supposedly left for dead.

Ace mourns the loss of her newfound friend, while the Doctor comes up behind her. Ace takes a few moments to collect herself before saying it's time they go home — back to the TARDIS. The Doctor gives a wonderful monologue as they walk off into the distance, and Ace and the Doctor then go on to have many more adventures... but sadly, for the viewers, this would be the end, after twenty-six years and 155 complete stories...

...anyone in the mood to read some books? Audios, perhaps?

Or how about a Big Damn Movie?

The Master makes one last appearance, and this time Anthony Ainley was finally allowed to play the character in the more understated way that he had longed for since 1981. Ace is also extremely well developed for an old-series companion, culminating the final part of her three part story arc and serving as the basic template for the characterization and portrayal of most companions in the revival series (which itself owes damn near everything about it to this season and the previous one).

According to the writing team at the time, they were putting together scripts for a "Season 27", intended to air in the second half of 1990, when the axe fellnote some sources claim that a "Season 28", intended to air in 1991, was also planned, though this hasn't been definitively verified; while enough scripts were penned during the waning days of the classic series for three potential seasons (barring the possibility of some being rejected or abandoned during production), among the stories claimed to have been written for Season 28 are ones commonly believed to have been penned with Season 27 in mind. Season 27 would have seen Ace's departure to study to become a Time Lord at Prydon Academy on Gallifrey, the introduction of a new Classy Cat-Burglar companion, and the Seventh Doctor's regenerationnote for those wondering, Paul McGann was never under consideration for the role of the Eighth Doctor until the 1996 TV movie; prior to the show's cancellation, the Doctor Who staff actually had Richard Griffiths and Ian Richardson in mind as their top picks for Sylvester McCoy's replacement. Had this season been finished and aired, it would've made Sylvester McCoy the first actor to play the Doctor for more than three seasons since Tom Baker, albeit with much shorter seasons than was the case for the majority of the Classic era.

Following Big Finish's adaptations of the "lost" 1986 season, in 2011 they adapted the stories from Season 27. Two other stories would be adapted into the Seventh Doctor novel The Pit in 1993 and the Sixth Doctor audio play The Rani Elite in 2014. The remaining two stories, "Avatar" and "A School for Glory", remain unadapted to this day (though the latter did seem to at least partly influence the Seventh Doctor novel Human Nature and its later adaptation in the revived series, starring the Tenth Doctor).

Incidentally, Ace's... special friend (Karra the Cheetah-person)... was played by Lisa Bowerman, who would proceed to the Doctor Who Expanded Universe as Professor Bernice Summerfield.

Doctor Who was pulled off the air following this episode, would not officially return until the 1996 movie, and would not return as a regularly-airing television series until the start of the revival series in 2005. Although the BBC's studios for the series were officially shut down in 1990 and everyone knew the series was, in effect, cancelled, the BBC repeatedly insisted that it was simply a hiatus and that the show would return to television in the future. Technically it did, and the BBC did repeatedly try to revive the series as a theatrical film first in the late '90s (which, incidentally, is the reason why the revival series began so belatedly), but for all intents and purposes the 16-year "Wilderness Years" era is seen by fans and the general public as the show having been cancelled.

The thirtieth-anniversary Children in Need special "Dimensions in Time" aired in 1993, but this is generally regarded as non-canonical (worth noting though is that a proper canonical Milestone Celebration special was planned for 1993, but various pre-production difficulties led it to be replaced with the much-maligned "Dimensions in Time").

As for Rona Munro, with this serial she became only the third woman to be credited as scriptwriter on the series, after Barbara Clegg for "Enlightenment" and Jane Baker for four stories co-written with her husband Pip.note  "Paula Moore" is credited for "Attack of the Cybermen", but this is a pseudonym; the specifics are hazy, but the story's true authorship is generally credited to Eric Saward with input from Ian Levine. She would eventually return to Doctor Who to write the Twelfth Doctor story "The Eaters of Light", making her the first writer to contribute to both the Classic Series and the Revival Series (and in all likelihood the only one, given that most of the other Classic Series writers were either retired or dead by the time "The Eaters of Light" aired).

Unfortunately, Ace's adventures with the Doctor up to her eventual departure, plus the full extent of the Seventh Doctor's darkened personality are not depicted, leaving the viewer to scratch their head or make a dash for the Seventh Doctor novels that fill in the holes.

For twenty-six years, we all had a good run, now Michael Grade thinks that we've had too much fun...
Feedback

The original run of Doctor Who ends with the Doctor and Ace happily walking back to the TARDIS to continue their adventures.

The original run of Doctor Who ends with the Doctor and Ace happily walking back to the TARDIS to continue their adventures.