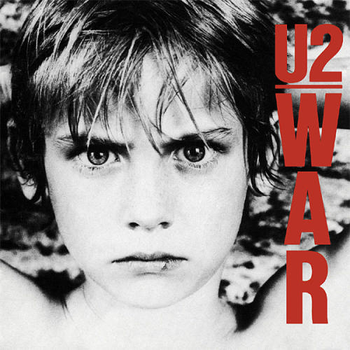 Say it's true, it's true, and we can break through
Though torn in two, we can be one.
I can't believe the news today
Oh, I can't close my eyes and make it go away
How long, how long must we sing this song?
How long? How long?
'Cause tonight we can be as one, tonight

Broken bottles under children's feet
Bodies strewn across the dead end streets
But I won't heed the battle call
It puts my back up, puts my back up against the wall
—"Sunday Bloody Sunday"
Advertisement:

War is the third studio album recorded by Irish rock band U2. It was released through Island Records on 28 February 1983.

At the time it surprised many for being a New Sound Album where the band grew the beard as songwriters. Many songs were very political, and directly referred to the civil war in Northern Ireland.

The album spawned three singles: "New Year's Day", "Two Hearts Beat as One", and "Sunday Bloody Sunday". The first two each peaked at #2 in Ireland, their highest showing yet in their home country, and were Top 20 hits in the UK (#10 and #18, respectively).