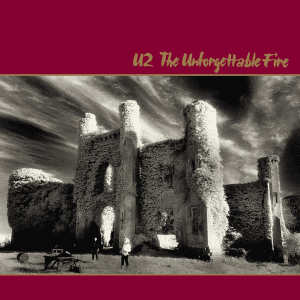 Early morning, April 4
Shot rings out in the Memphis sky
Free at last, they took your life
They could not take your pride
—"Pride (In the Name of Love)"
Advertisement:

The Unforgettable Fire is the fourth studio album recorded by Irish rock band U2. It was released through Island Records on 1 October 1984.

Seeking to find a more approachable sound, the band sought producers Brian Eno and Daniel Lanois. But just because they wanted something more relatable didn't mean they sought to mute their social messaging.

I mean, the title is inspired by an art exhibit about the bombing of Hiroshima.

The band didn't want to be written off as yet another Arena Rock band.

What was intended to be a month-long recording session at Slane Castle in County Meath dragged on into the summer, and moved to Windmill Lane, Dublin.

The album spawned two singles: "Pride (In the Name of Love)", and the Title Track. The title track would be U2's first #1 single in Ireland, while both singles would go well into the Top 10 in the United Kingdom (#3 and #6, respectively). And "Pride", a song that saluted American civil rights legend Dr. Martin Luther King, Jr., would be their first pop hit there, reaching #33 on the Billboard Hot 100.

The album was remastered for its 25th anniversary, released through Mercury Records on 27 October 2009. Four different versions were released, including a new vinyl album; the remastered CD release; a deluxe CD collection with a bonus CD of B-sides and live tracks; and a limited edition that added a DVD and a hardback book.

Sleep. Sleep tonight. And may your tropes be realized: