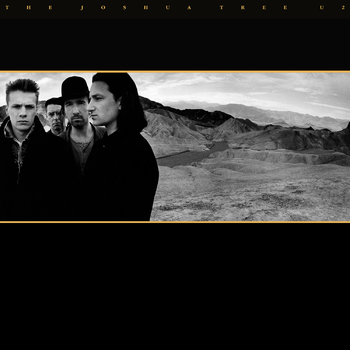 A man breathes into the saxophone
And outside we see the city groan
I wanna run, I want to hide
I want to tear down the walls that hold me inside
I want to reach out and touch the flame
Where the streets have no name

The Joshua Tree is the fifth studio album recorded by Irish rock band U2. It was released through Island Records on 3 March 1987.

Incorporating Darker and Edgier subject matter and instrumentation, the album transcended the band's more political output of the 80's to incorporate themes of identity, power, and betrayal, which resonated with audiences worldwide. U2's most well-regarded hits featured on the album, such as "With Or Without You", "I Still Haven't Found What I'm Looking For" and "Where The Streets Have No Name", received massive airplay. The Joshua Tree topped the charts in over 20 countries, certifying U2's international stardom.

Produced by Brian Eno and Daniel Lanois, the record featured an elaborate production style which ramped the richly-layered style of The Unforgettable Fire Up to Eleven and represented the culmination of U2's style at the time. Bolstered by the band's desire to experiment in the studio, Bono began to favor open-throated vocals over mumbled lyrics, shifting the band from a Post-Punk act with a post-punk audience to a more overtly Alternative Rock act for more mainstream markets. The music drew from Folk Music and Country Music, as well as Progressive Rock and Indie Pop, which combined pastoral imagery with spiritual ideals. The Joshua Tree has been described as a loose Concept Album which examines various aspects of The American Dream, without losing sincerity or accessibility in the process. Indeed, the album won the 1988 Grammy Award for Album of the Year and the Grammy for Best Rock Performance by a Duo or Group With Vocal.

As for its legacy, it was featured in an episode of the documentary TV series Classic Albums. In 2014 it was even inducted in the National Recording Registry for being "culturally, historically and aesthetically important". In hindsight, the album was also one of many whose American success heralded the rise of Alternative Rock as a mainstream force in American music, alongside other releases in 1987 including R.E.M.'s Document, 10,000 Maniacs' In My Tribe, Midnight Oil's Diesel and Dust, New Order's Substance, and Depeche Mode's Music for the Masses. However, this success mostly rested on the band's heavy-handed subject matter and rich instrumentation, which ultimately hurt U2 after the failure of their 1988 follow-up Rattle and Hum. The band would soon depart from these styles in 1991's Achtung Baby.

The album had some slight controversy in 1988, after assassin Robert John Bardo claimed he was inspired to kill actress Rebecca Shaeffer due to the song "Exit" on this album, but this accusation quickly blew over again.

The Joshua tree pictured on the back cover of The Joshua Tree was located not in Joshua Tree National Park, but at Zabriskie Point in Death Valley. The tree was knocked over by high winds

The 20th-anniversary edition included the following B-sides and outtakes:

I can't trope, with or without you: